11 Farmer’s Associations Gets Tricycles Worth N16. 5m In Nasarawa. 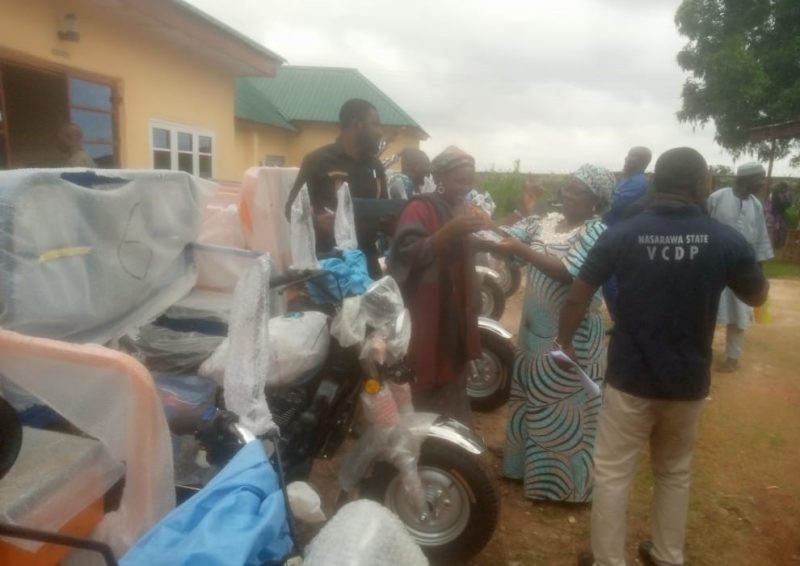 Dr Eunice Adgidzi, Nasarawa State Coordinator of VCDP,  made the disclosure while handling over the 11 tricycles to the beneficiaries on in Lafia.

Dr Adgizi explained that the tricycles is to address the transportation problems often encountered by the farmers and increase their income as well as their livelihoods.

She told the farmers who were drawn from Lafia, Doma, Karu, Nasarawa and Wamba LGAs to use the tricycles to transport their farm produce and also use it for commercial.

According to her, the distribution was made possible through the International Fund for Agricultural Development (IFAD) COVID-19 Rural Poor Stimulus Facility grant.

The Nasarawa State  Coordinator of VCDP said each tricycle is N1. 5 million and IFAD provide 70 per cent of the total cost while each group paid 30 per cent to enable them benefit.

“We distributed fertiliser, seedlings and other farming inputs to the farmers free, but for equipments they have to pay a token as part of their commitment,” she added.

The Coordinator said that the project is aimed at improving  the incomes and food security of poor rural households engaged in production, processing and marketing of rice and cassava on sustainable basis.

She also expressed gratitude to Gov. Abdullahi Sule of Nasarawa State for his continued support to the project and assured that the state would get excellent result and improved output.

Responding on behalf of the farmers, Bala James-Ewuga of Akwa Rice Irrigation Farmers Limited, thanked the government for the support and promised to use them judiciously.

He said they would use them in addressing transporting their agricultural produce and would also use them for commercial to increase the fortunes of members.