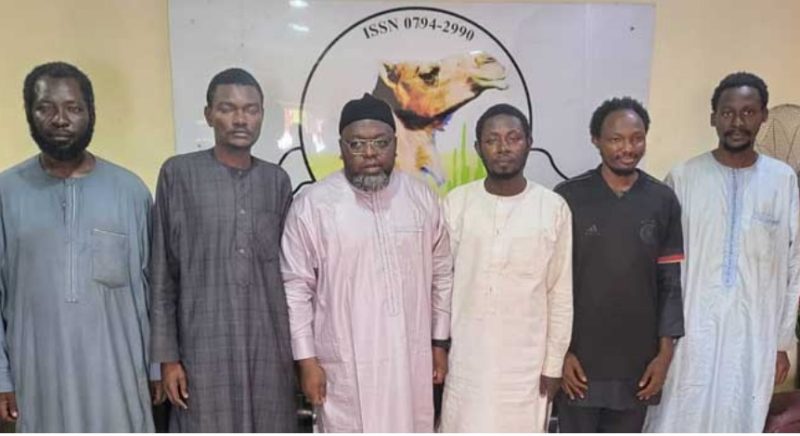 Five more victims of the ill-fated Abuja-Kaduna bound train who were attacked and abducted by terrorists on March 28, regained their freedom on Tuesday.

They were released by their abductors who whipped them mercilessly last week and threatened to kill and sell them off if the government failed to meet with their demands.

Confirming their release to journalists in Kaduna on Tuesday, the self-acclaimed lead negotiator and media consultant to Sheikh Ahmad Gumi, Malam Tukur Mamu, urged the Muhammadu Buhari-led federal government to hasten and negotiate the release of the remaining victims in captivity.

Mamu said those still in captivity were in very dangerous and precarious situation.

He also harped on the need for dialogue with the terrorists, insisting that there was nothing dialogue and negotiation could not achieve.

“In a situation where military force cannot work, dialogue would certainly work,” he said.

All the freshly released victims expressed gratitude to Allah and thanked Tukur Mamu for the role he had played while negotiating with their captors.

It is not yet clear if ransom was paid to the terrorists to secure the release of the abductees.

The security agencies and the federal government are yet to confirm the development as at the time of filing this report.

So far, 37 victims have regained their freedom. The number of those still in captivity now stands at 35.

Gunmen had on March 28 blown up the rail track, killing some and abducting scores of passengers.

Tuesday’s release is coming a few days after three other victims were freed after paying hundreds of millions of Naira as ransom.

The victims, who consist of two males and a female, secured their freedom on July 25.

Their release came shortly after the terrorists released a viral video where they were seen mercilessly flogging their victims. They also threatened to abduct President Buhari and Kaduna State Governor, Nasir el-Rufai.

The presidency reacted to the threat hours after, accusing the insurgents of using propaganda to compel the government to yield to their demands.

In a statement, the Senior Special Assistant to President Muhammadu Buhari on Media and Publicity, Garba Shehu, said security forces were not helpless in stemming the tide of insecurity confronting the country.

As Commander-in-Chief of the Armed Forces, Shehu said President Buhari has done more than was necessary to enable the military do their work.