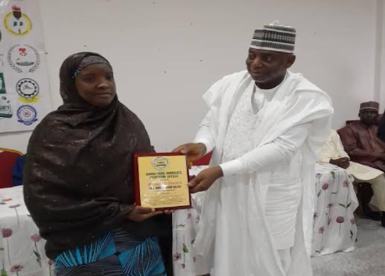 The Chairman of the Nigeria Union of Journalists (NUJ), Kaduna Council, Comrade Asma’u Yawo Halilu, has been awarded as the ‘Most Transformational NUJ Chairman of the Year 2022.

This followed her tremendous reforms in the last ten months of her administration.

According to the Convener of Kaduna Young Journalists (the organizer), Basheer Masa, the Kaduna NUJ Chairman emerged winner after an online poll was conducted.

In her response, while receiving the award, the NUJ Chairman said that the award will spur her and other exco members to do more in the discharge of their duties as leaders.

“I am very delighted to have been conferred with the award of best transformational NUJ Chairman, it shows that members of our great union appreciate our efforts in trying to make our secretariat serene and habitable for them.

I assure you that this award will spur us to do more, we will be more committed in the conduct of the affairs of the NUJ especially, as regards welfare of our members,” the NUJ Chairman emphasised.