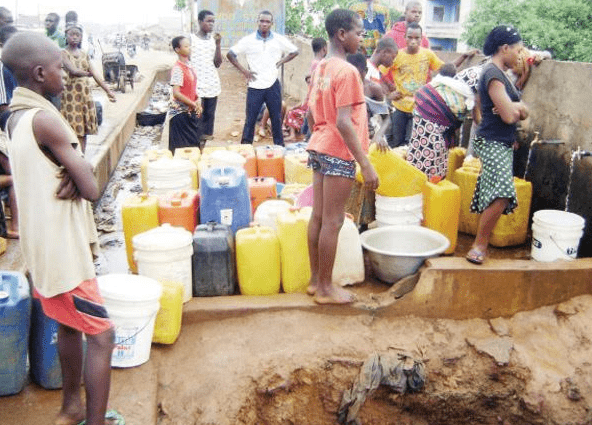 Water related Businesses in Nasarawa state, especially those in Lafia the State capital, are faced with acute water scarcity as Business men and women now trek miles to get water.

Most food vendors and residents now engage the services of water vendors who now smile to their banks on a daily basis.

Meanwhile, those who cannot afford the charges from the vendors were observed to have been struggling for water with domestic animals from the same ponds.

The development, coupled with the strike action of Judicial Staff worker’s union of Nigeria JUSUN and Academic Staff union of polytechnic ASUP, Money Central noticed has worsened the situation of things in the state.

Lamenting the situation, some residents of the metropolis who spoke to Money Central wondered how the situation would be in the rural communities.

“If accessing potable water in the state capital has become something else, I am just imagining how the situation has become in the rural areas where there are no boreholes let alone tap water,” said Lamin Garba.

The people who could not fathom why water scarcity has continued to be the case in the state despite the huge amount being sunk into the sector by the state government, said there is the need for the government to as a matter of urgency improve water infrastructure in the state.

Citing handwashing as one of the major precautionary measures of preventing the spread of COVID-19 pandemic, residents lamented that the acute water problem has no doubt begun to stop them from adhering strictly to the measure of handwashing.

Aware of the development, some staff of the State Water Agency who pleaded anonymity said the leadership of the agency are presently leaving no stone unturned in order to address the water shortage.

For residents in Yola and it’s environ, water supply by Adamawa State Water Board (ASWB) is a mirage, it’s functionality having outlived its usefulness.

Residents in the outskirts would only forgive you once, if you mention government’s water supply drive, but one may not be lucky the second time.

To them, politicians are their heroes, they dig boreholes in strategic areas for residents to save the poor. These residents, especially the ones with enough Socio-Economic Status often connect these boreholes for water supplies into their homes.

This is as the wealthy too install the facility in their houses. This, as expected jack’s up the rent. However, the state government expressed offence at this. It claimed severe discomfort and serious commitment of finances in ensuring steady supply in the state.

The General Manager, Adamawa State Water Board (ASWB), Adamu Halidu in an interview stated that the state has four water treatment plants, each in Numan, Yola, Jimetta and Mubi with each pumping not less than 6million liters of water daily.

Halidu lamented that almost all the plants are undergoing rehabilitations and their hands are tied. Some of the residents have lost confidence on the agency to supply water as Kingsley Samuel Iyang a teacher complained bitterly on the constant lack of water supply in the state.

According to him water supply in Adamawa is on a very low side. He added that the government should do their best to ensure that the supply of water should get to the rural community.

Fisayo Adekeye a business woman who has lived in Yola for 12yrs in said that water supply in Adamawa is not sufficient. She added that most houses in Adamawa have no provision for water.

Without water nothing can be done. She complained that the board distribution is not doing well at all. She also said they can only enjoy water supply for 6hours for 4 days a week.

She added that no society can survive without water and so she appealed to the government of Adamawa to look rightly into proper distribution of water.