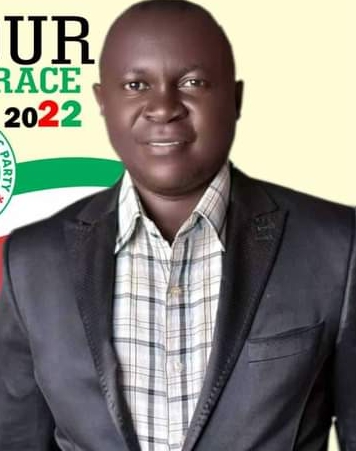 The immediate past Assistant Secretary of the Nigeria Union of Journalists, Benue state council, Comrade Vincent Nyinongu has declared his intention to contest the position of Chairmanship of Gwer West local government council on the platform of the Peoples Democratic Party, (PDP).

The council polls which is slated to hold in the state in May, this year, according to him, was timely, saying he was much prepared to serve his people having garnered journalistic experience and academic qualification.

Addressing his kinsmen and PDP stakeholders at Naka, the council headquarters, the Chairmanship aspirant said the choice of PDP was because, the people of Gwer West are 75% on ground and in support of the part as shown in the last general election in 2019.

According to him, the council which is heavily under sustained attack by herdsmen, needs someone with the experience and mind to confront the menace headlong so as to enable farmers and the natives return to their ancestral homes.

Comrade Nyinongu while commending governor Samuel Ortom for enactment of the anti open grazing law in the state, promised to contribute his quota in ensuring peace and development at that tier of government.

“If voted as chairman, agriculture, security, revenue generation, healthcare delivery, water supply among others, will be given priority”.

He therefore, urged PDP stakeholders to consider him as their top priority, assuring not to disappoint the party in terms of delivering dividends of democracy to the electorates.

The Chairmanship hopeful who is the Chief Correspondent of Daily Asset Newspaper in Benue state, said zoning has favoured him, and called for support to clinch PDP nomination and victory at the Polls in the forthcoming election in the state. #