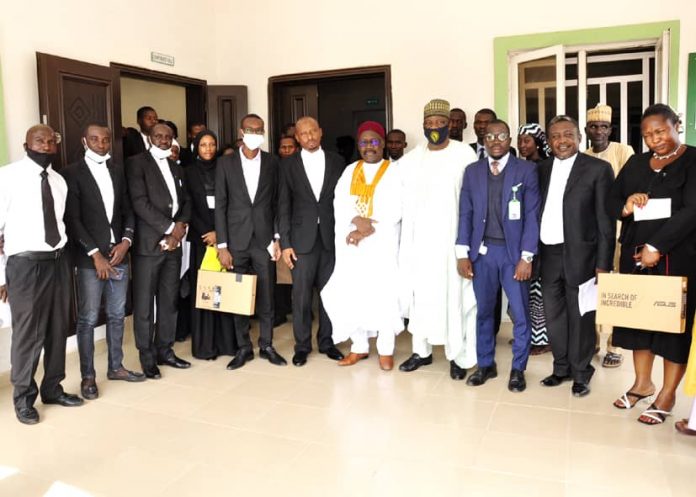 Gombe State Government has assisted Law Students of Gombe State origin studying in various campuses across Nigeria with laptops and also donated cash to them worth thirty three million, eight hundred and fourth five thousand naira to aid them in settling their academic fees and so as to achieve better performance.

Making the presentations at the conference hall of the Ministry of Justice in the Metropolis, Governor Muhammadu Inuwa Yahaya assured that his administration will continue to provide the needed atmosphere and support for excellent performance towards achieving the needed target of improved capacity, efficiency and quality education.

According to the Senior Special Assistant, Media( Deputy Governor’s Office) Jack Tasha, Governor Yahaya who was represented by the Deputy Governor, Dr. Manassah Daniel Jatau, said the provision of laptops and the cash assistance were to encourage students of Law School build their educational capacity to prepare them for a better professional practice.

He urged the recipients to make good use of the items and the cash in the spirit of ‘Gombawa diban fari’ meaning ( the people of Gombe always first in every well meaning venture’ to perform excellently in their respective schools.

Speaking earlier, the Commissioner of Justice and State Attorney General, Zubair Muhammad Umar, informed the gathering that the occasion was for presentation of Laptops and 370,000 cash assistance each to 61 Gombe indigenes, in six campuses of Law Schools in Nigeria.

The Attorney General highlighted that the cash was to help them settle their school fees while the laptops are to help them in their studies, pointing out that,the whole assistance for the students gulped Thirty Three Million, Eight Hundred and Fourth Five Thousand Naira only.

Barr. Zubair Umar explained that this was a demonstration of the commitment of the Inuwa Yahaya-led Administration to the people of the state, calling on the students to reciprocate the gesture of the government and justify the spending of the government in them by performing better to the pride of the Gombe people.

The Commissioner commended the benevolence of the Governor by coming to the aid of the students whose parents are poor and cannot pay their fees, adding that even though they are not requested to sign any BOND agreement, but the government is optimistic that they are going to be ambassadors of the state, and assist in developing it, in their areas of assignments, especially knowing the background that they are sponsored by the hard earned tax payers money.

Speaking on behalf of the recipients, the National Chairman, Association of Law Students, Gombe Chapter, Comrade Idris Mohammed appreciated the assistance given them, pledging to justify the spending on them.

He appreciated the Government for coming to their aid by providing them with laptops and cash assistance to enhance their performance in school.