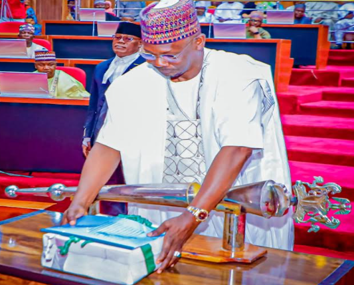 Going by the analysis, the education sector has the largest share of allocation with N37.43 billion, followed by health with N18.61 billion. Governor Sule said the budget is predicated on parameters, which include an oil price benchmark of 70 US Dollars per barrel; a daily oil production estimate of 1.69 million barrels (inclusive of Condensates of 300,000 to 400,000 barrels per day); exchange rate of 435.57 Naira per US Dollar; and projected GDP growth rate of 3.75 per cent and 17.16 per cent inflation rate.

He said the state government will focus on sustaining and improving general security and good governance; completion of ongoing projects; the welfare of workers; creation of employment opportunities for women and youth; provision of inputs and supporting agriculture as a way of boosting production, developing value chain and strengthening commercial ventures for a stable economy; and development of infrastructure through Public Private Partnership (PPP) as well as an enhanced investment especially in the Mining and Housing Sectors during the 2023 fiscal year.

He promised that the state government will continue to strengthen internal control mechanisms in public financial management.

“Accordingly, the government will continue to review the monthly overhead cost and ensure strict monitoring of the activities of Ministries, Departments and Agencies (MDAs) in line with the fiscal expenditure framework of the Administration. This will further sustain our resolve for transparency and accountability in view of our limited resources.

“The adoption of the Central Billing System (CBS) will checkmate and promote fiscal discipline as this will block all financial leakages in our various operations.

“We have restructured the Nasarawa State Debt Management Office to manage both our external and internal borrowings in accordance with standard practice. Likewise, the Government established the Efficiency Unit within the Ministry of Finance so as to give credence to the implementation of the Appropriation Law,” he explained.

He said the state government envisaged an increase in the Statutory Revenue Allocation from the Federation Account and Internally Generated Revenue (IGR) as well as capital receipts which necessitated the increase in the 2023 budget.

“We are also mindful of the fact that we have not yet reached the desired peak of our IGR contribution to the State revenue. This Administration is determined to pursue vigorously all other sources of revenue due to the government and collect the same at a minimal cost.

“To achieve this objective, the Nasarawa State Board of Internal Revenue Service (BIRS) will be strengthened to operate at an optimum level in order to boost our IGR performance,” he noted. Responding, the Speaker of the State House of Assembly, Hon Ibrahim Balarabe Abdullahi, commended the governor for the timely presentation of the budget.

He assured the governor of speedy passage of the budget for the provision of more dividends of democracy to the people of the State.

“I wish to note with a profound sense of joy, the excellent working relationship that has prevailed between the executive and the legislature since you assumed office in 2019,” he said.