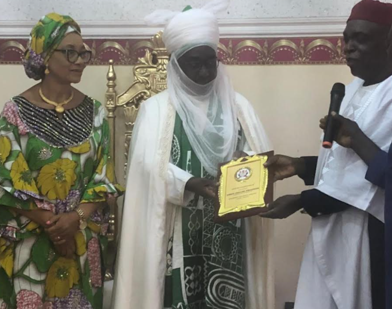 The appointment was coming as part of the University’s preparation to have its maiden graduation ceremony next year.

The University’s Management led by the Founder and Pro-Chancellor, Engr. Simon Ifediora Nwakacha presented the appointment letter to the Emir at his Palace in Zaria on Thursday.

Receiving the appointment, Emir Bamalli called for the establishment of more universities in Nigeria, to meet Nigerians demand for quality education.

Speaking on the bandits attack on the University last year, Emir of Zazzau lamented the state of insecurity in Nigeria, saying that, “I commiserate with the founder and management of the university over the happening of last year which was really disheartening. We pray that Allah continue to protect us all from these happenings.

“This is not the same country we used to know, which was very peaceful and safe for people to move around at all times. Just yesterday, we saw a gory picture of a Police Officer being shot along Abuja road. We pray to Allah to protect us all against this banditry and other challenges,” he prayed.

While expressing appropriation to Greenfield University Founder and Management for finding worthy of appointment as their pioneer Chancellor, the Emir expressed delight that the university has grown In students population, four times than it was.

According to him, “This is remarkable and it is an indication that there is a lot to be done. We need more universities in Nigeria than what we have at the moment and I can say proudly that, being a private university located in Kaduna, you have gotten a good location considering the cost of living and cost of transportation that are very high in other climes.

“I am sure your presence in Kaduna will contribute to meeting the demands of our people. We used to have only three universities in Kaduna State, the Ahmadu Bello University, Kaduna State University and the Nigerian Defence Academy. You have now come as the first private university in the State. Our people now don’t have to travel to Abuja before they access quality education.”

Earlier while presenting the appointment letter to the Emir, the Founder, Engr. recalled that, bandits attacked the main campus of the University last year and five 300 level students and a porter were killed, a situation which forced the university to relocate to its city campus inside Kaduna town.

He said the university has since its relocation to the city campus continued with uninterrupted academic programmes, with the student population now four times larger, and it is sent to graduate the first set of its students by next year.

According to him, “by next year, we will be graduating the first set of our students and part of the process is that, at this time we should appoint a Chancellor who will among other functions be presiding over our graduation ceremony. This position has however been reserved in our heart for the Emir of Zazzau, because it was the late Emir of Zazzau, Alhaji Shehu Idris, who prophesied that, Imperial School will one day establish the first private university in Kaduna State. And that came to pass.”