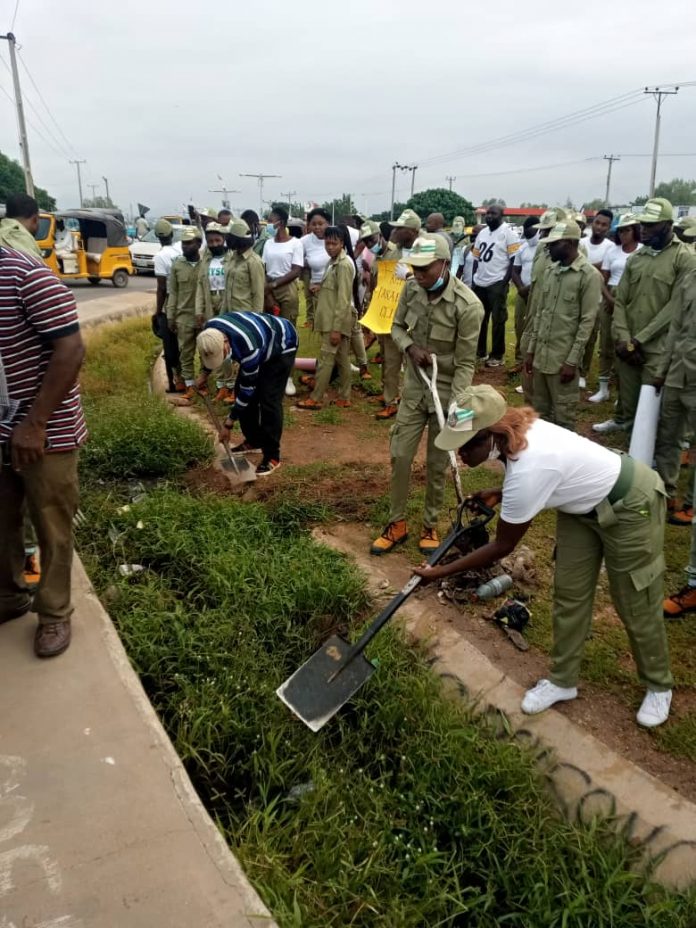 Mr Anthony Nzoka the Taraba Coordinator of the National Youth Service Corps (NYSC) has called on the State government to support the national sanitation exercise of the corps to tackle flooding and environmental diseases in the State.

Nzoka made the call at the flag off of the 2021 NYSC national sanitation exercise with the theme ‘Clean Environment/Good Hygiene: Penacea for Good Health and Long Life’ in Jalingo.

According to him, clean environment was key in the prevention of environmental diseases.

“I want to call on the State government, traditional rulers and community leaders to join hands with the NYSC in this sanitation exercise to help prevent diseases and remove blockages that led to the recent flooding in the State.

“Jalingo is on the plain land and if we don’t prioritise environmental sanitation, we will continue to witness serious flooding worse than what we had recently.

“It is unfortunate that we embarked on this exercise without a single functional waste disposal truck  and we have to hire small trucks to help dispose the waste.

“Government agencies, private organizations and individuals should take up  the challenge  in this regard by supporting the corps with tools to succeed ,” he said.

Earlier, while reading the address of the Director General of NYSC, Brig, Gen  Shuibu Ibrahim, Nzoka said the exercise followed the recent nationwide medical outreach by the NYSC Health Initiative for Rural Dwellers which discovered that most of the ailments were as a result of poor hygiene.

The DG assured the people that the scheme would continue to  offer health and other services, including environmental protection for the good of humanity.

Alhaji  Abdulnaseer Boboji, the Chairman of Jalingo Local Government Council  pledged the support of the Council to NYSC activities and programmes.

Represented by Alhaji Umar Usman, the leader of Jalingo Legislative House, Boboji appealed to NYSC to sustain the exercise.

He called on community and religious leaders in the councils  to join the corps members in the exercise.

MoneyCentral gathered that the corps members in Taraba led by the State coordinator, removed blockages and sweeps the streets of Jalingo especially at the popular Michelin roundabout, Palace way among other  junctions in the Jalingo metropolis.