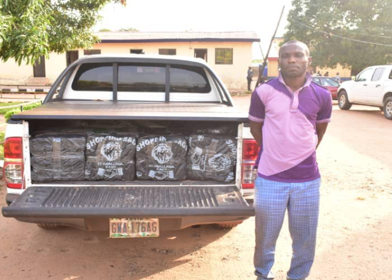 Benue state Police command says on 9th of this month at about 0930hrs while on stop and search duty along Enugu-Otukpa road, it intercepted a Hilux vehicle driven by Obinna Nsofor and one other.

A statement signed by the Police Public Relations Officer for the command, Superintendent of Police, SP Sewuese Anene, on sighting the Police patrol team, they took to their heels but they were chased and arrested by the operatives.

“On the spot search of the said vehicle led to the recovery of thirty-eight cartons of tramadol tablets.”

According to her, investigation is ongoing to identify the source of these drugs and the expected destination and called on members of the public to volunteer information to the police about criminal activities for quick action.