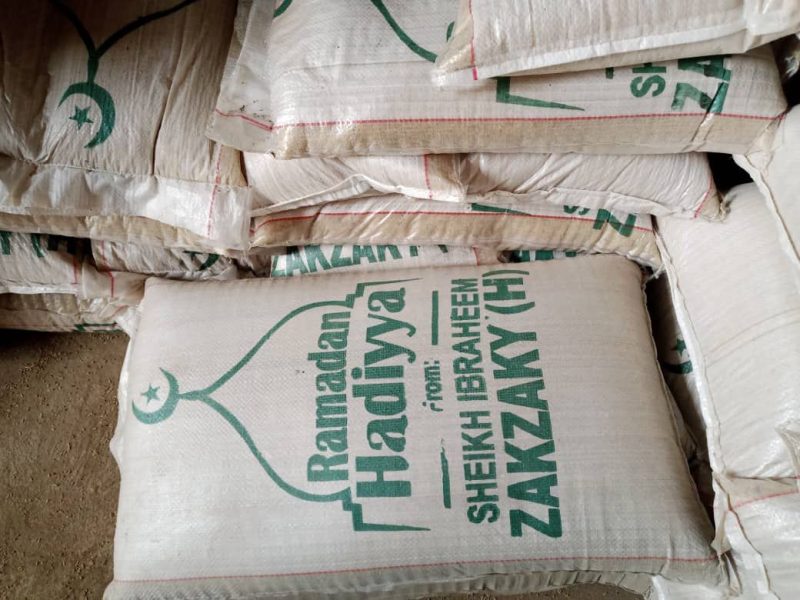 The leader of the Islamic movement, Shaikh Ibraheem Zakzaky, has distributed foodstuff worth millions of Naira to the needy to mark the beginning of this year’s Ramadan season.

The food items, which include sugar, rice, maize and millet, were distributed to assist as many needy Nigerians as possible during the Ramadan.

The distribution started this Wednesday at Zaria and will continue in other parts of the county.

Our reporter who witnessed opening of the event at Zaria, Kaduna and the rest of the Kaduna Local Governments notes’ that, it has been Sheikh Ibrahim Zakzaky’s practice to share food items to the poor and the needy for over 20 years.

The leader only recently regained his freedom from detention last year after a Kaduna state High Court discharged him and his wife Malama Zeenat Ibrahim from all 8 counts charges against them by the Kaduna State Government.

The head of distributions, Ahmed Musa, added that the cleric sends his best wishes to Muslims all over the world and assures them of his prayers throughout the Islamic fasting season.

The food items were distributed to the internally displaced persons (IDPs) in Katsina, Niger, Sokoto and Zamfara States, in various IDP Camps in their respective States and communities in Northern Nigeria who are in need of food during fasting of the month of Ramadan.

Over 15 northern States benefited from this distribution. Sokoto, Kebbi, Katsina, Kano, Plateau, Nasarawa and Bauchi,States are among the beneciarie of this kind gesture.

Christians from southern part of the country will also benefit from the kind gesture of Sheikh Zakzaky.