YPP Vows To Take Over Nasarawa In 2023 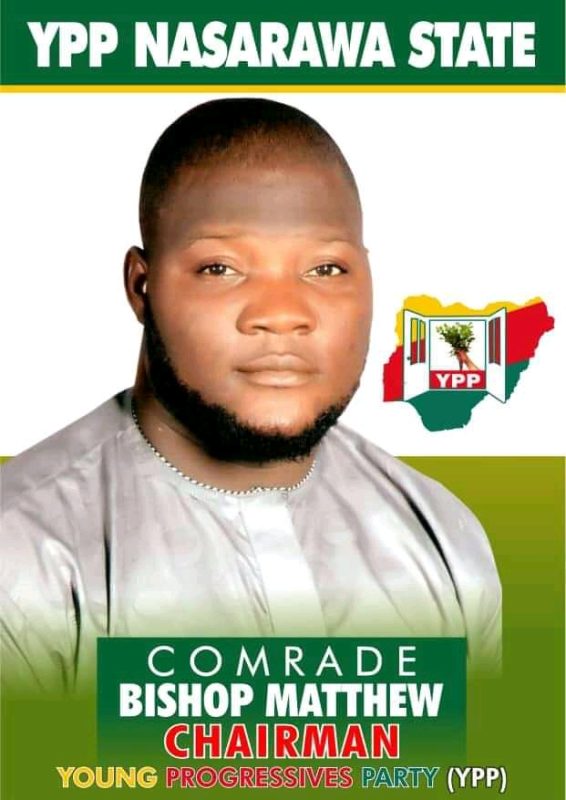 The Young Progressives Party(YPP ) in Nasarawa State says the party has the human resources to wrestle power away from the All Progressive  Congress(APC) in 2023.

The Chairman of the party Bishop Matthew, who stated this in an exclusive interview with MoneyCentral correspondent in Lafia, said the party was poised to take over Nasarawa to provide good governance and infrastructure development, currently lacking in the state.

He said: “In 2023, it will dawn on all Nasarawa people that YPP has come to take over the state.

“We have men of high caliber and proven integrity at the top-level of Nigeria’s politics, who are prepared to redeem Nasarawa from APC’s  maladministration and move the state forward.

“We have men, who are ready to wipe away the tears of the downtrodden.”

He said the present administration in Nasarawa had made the state a laughing stock among other states of the federation.

“We are all ashamed of the total dilapidation of infrastructure in the state. No sector is spared,” he said.

He said that if President Muhammadu Buhari and the Independent National Electoral Commission (INEC) would ensure that votes count in 2023, YPP will surely takeover the state, adding that “it will not be business as usual in Nasarawa.”

He called on Nasarawa residents to support YPP in the 2023 general elections, saying that, the party was prepared to change the narrative by turning the fortunes of the state for the better.

“There is nothing going on in Nasarawa state. So many people are suffering. No infrastructures or social amenities. The Governor promised to industrialized the state but up till today, nothing has happened.

“The two years of his administration has been very hectic to the people of the state. But I want to assure residents of the state that if they elect our party’s candidate in 2023, we are going to bring a positive change to Nasarawa state,” Mathew said.