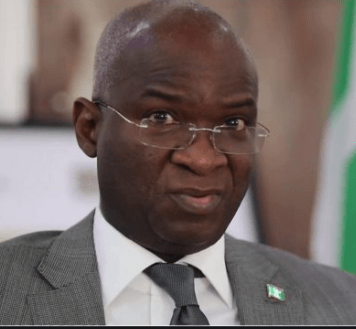 Editorhttps://moneycentral.com.ng
The federal government is collaborating with the Ogun Government to secure the Right of Way (RoW) for the construction of three bridges and an interchange on the Lagos-Ibadan expressway. The Minister of Works and Housing, Babatunde Fashola, said this during an inspection of the highway last week.

Mr Fashola, who was joined by Governor Dapo Abiodun at the Lotto Bridge under construction, said the highway accommodates over 40,000 vehicles daily, hence the urgent need for additional flyovers and interchanges for decongestion.

The bridges are under construction at Makun, MFM, and Lotto (Mowe) areas on the Lagos-Ibadan expressway.

“We are trying to execute an interchange that will separate the main carriageway and give commuters choice, especially those going to religious places to worship, those going to universities, and so on and so forth.

“So that what used to cause the congestion is limited to the barest minimum if not totally eradicated when the road is finished.

“So, we now require additional land to build the interchange, that is why I called the governor (Dapo Abiodun),” he said.

He said the Buhari administration inherited several stalled projects which he was committed to completing by adequately funding the projects.

Mr Fashola expressed satisfaction with the progress of work on the ongoing reconstruction/rehabilitation of the Lagos-Ibadan Expressway.

On his part, Governor Abiodun assured that the state government would give all the land and support needed.

Earlier, the Federal Controller of Works in Lagos, Olukayode Popoola, gave the measurements and dimensions needed for the bridges and interchange.

Mr Popoola also gave details on the number of buildings and services on the Right of Way of the bridges which, without paying compensations, would stall the project.

He said that section one of the Lagos-Ibadan Expressway project, which spans from Ojota in Lagos to Sagamu Interchange “has achieved 56 per cent completion”.

Also, during inspection of section two of the project, which spans from the Sagamu Interchange to Ojoo in Ibadan, the Federal Controller of Works in Ogun, Umar Bakare, said the section was 63 per cent completed.

Conducting the minister through the site, Mr Bakare assured that all the challenges slowing down the project around the Ogere axis had been dealt with, helping construction get to the final layer on several portions.