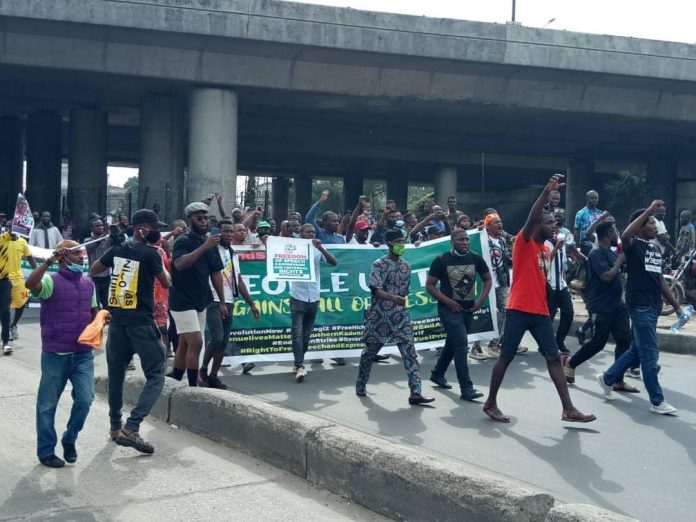 Major markets and shops in many parts of Ogun State were on Saturday shut as traders and residents stayed back home for the fear of backlash by Yoruba nation agitators and youths.

Anxiety gripped the people of the state as the youths and agitators held June 12 protests in Abeokuta, Ijebu-Ode, Sango, and other parts of the state.

A handful of protesters armed with #BuhariMustGo and #YorubaNation placards were seen on the streets of Abeokuta.

It was also gathered that major markets in Ijebu-Ode, Ilaro, Sango, and other places were affected over the fear of a clash between pro and anti-government.

As early as 7:30am, joint security teams embarked on a show of force around the state capital and some parts of the state to curtail the activities of the protesters.

A police helicopter was also seen hovering over the Abeokuta metropolis.

There were beehives of activities at MKO Abiola Stadium, Kuto, where the state government is marking the June 12 Democracy Day.

According to a PUNCH report a Coordinator of Oduduwa Nation agitators, Mrs Sola Kogbodoku, said the protest was meant to intimate the world that Yorubas are ready for secession.

She said, “We are here for a peaceful protest to let the whole world know that we, Yoruba people are ready for freedom.

“We are ready for self-determination. This is a rally without a fight, without war, without killing, and without any atrocity.”

Another Yoruba nation agitator, Azeez Suleiman, said, “We are here today to let everybody throughout the whole world know that Yoruba is a typical nation created by Almighty God.

“All our resources should not be taken away from us. The Yoruba are being treated like a slave on their father’s land which is not supposed to be.”