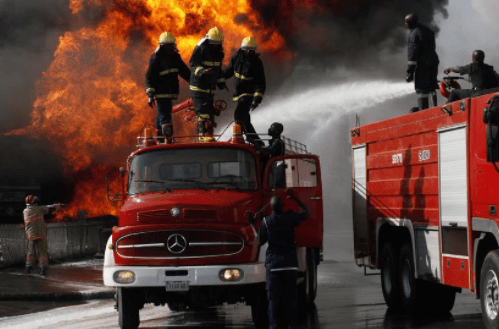 A section of the popular Bodija market in Ibadan, Oyo State capital has been gutted by fire earlier this morning.

It was gathered that some parts of the market got burnt on Monday morning, one of the days the federal government declared as public holiday in celebration of Eld-el-Kabir.

Although the cause of the inferno could not be established as of press time, it was gathered that the fire may have been caused by high power voltage in the market.

One of the affected traders, Romoke Ganiya Jelili said she lost more than N5 million to the inferno.

He said: “We received a call at  5:35am and we moved to the market and put out the fire immediately.

“There was no loss of life and nobody was injured in the incident. We were informed late. We didn’t receive any call from the people in the market, it was a policeman in Yemetu area that called and we responded swiftly”, he added.

Adeleke therefore advised residents of the state to always put safety measures in place to prevent fire outbreaks, and to always call fire service immediately there is an outbreak.

Several millions were lost on Monday morning when fire gutted many parts of the Bodija International Market in Ibadan, capital of Oyo State.

The inferno raged massively as traders wailed over their loss. pic.twitter.com/S0rRgC48Po