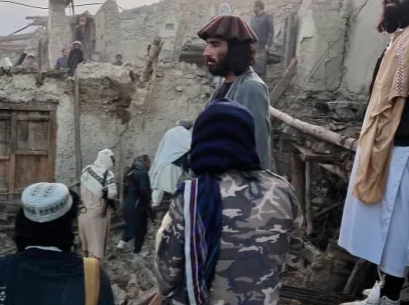 The number of people killed in an earthquake that hit Afghanistan’s Paktika and Khost provinces has reached 1,500, Al Jazeera reported, citing a Taliban official (the Taliban movement is outlawed in Russia).

According to him, the quake left over 2,000 people injured.

The United States Geological Survey (USGS) said the magnitude of the earthquake in the early hours of Wednesday was 5.9, revising an initial estimate at 6.1.

The epicentre of the tremor was about 46km (27 miles) from the city of Khost, near the Pakistani border, the USGS said.

“People are digging grave after grave,” said Muhammad Amin Huzaifa, head of the Information and Culture Department in hard-hit Paktika.

“It is raining also, and all houses are destroyed. People are still trapped under the rubble,” he told journalists.

Earlier, interior ministry official Salahuddin Ayubi said the death toll was likely to rise “as some of the villages are in remote areas in the mountains and it will take some time to collect details”.

Yaqub Manzor, a tribal leader from Paktika province, said survivors were mobilising to help those affected.

“The local markets are closed and all the people have rushed to the affected areas,” he told AFP news agency by telephone.

Footage from Paktika province showed victims being carried into helicopters to be airlifted from the area. Images widely circulating online from the province showed destroyed homes, with residents going through the rubble.