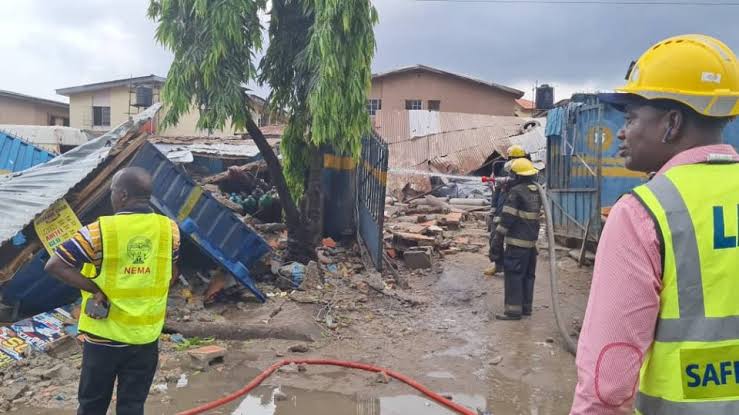 No fewer than Five persons have been confirmed dead in a gas explosion at Ladipo in the Mushin Local Government area of Lagos State.

He stated that the bodies of four adults have so far been recovered from the scene of the explosion. They comprised three men and a woman identified as one Mama Funmi.

Emergency workers at the scene of the gas explosion at the Ladipo Spare Parts Market in Lagos State.

While a 10-year-old boy was rescued and taken to the hospital, he died before getting to the medical centre.

Farinloye explained that the fire at the scene had already been put out while emergency workers were making effort to recover more bodies.

The explosion occurred two weeks after a high-rise building under construction collapsed with dozens trapped in Ikoyi, Lagos.

At least 45 bodies were recovered from the rubble of the 21-storey building located along Gerrard Road in the nation’s commercial hub.

Among those who died were Mr Femi Osibona, the developer of the ill-fated property and founder of Fourscore Homes Limited.