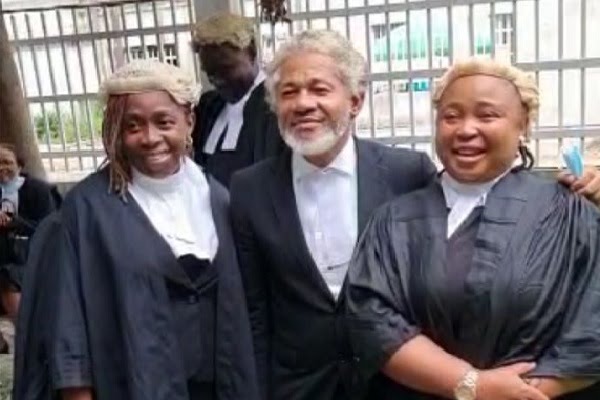 A Lagos human rights lawyer, Mr. Malcolm E. Omirhobo, on Wednesday in Lagos dropped his religious attire saying that the ‘spirit asked him to appear in normal dress.

Omirhobo, who caused a stir on Thursday, June 23, 2022 at the Supreme Court and Monday, June 27, 2022 at a Federal High Court, Lagos in a lawyer’s gown and wig but, adorned with ‘Olokun religious’ attire, said that he was complying with his religious beliefs and in keeping with the ruling of the Supreme Court on respect for people’s fundamental rights and religion.

Omirhobo, who appeared at the Federal High Court in Lagos on Wednesday however wore the approved legal full wig, gown, black trousers and shoes.

Speaking with journalists, Omirhobo said; “The spirit asked me to go on normal dress. I would revert to my religious garb again if the spirit so directed me to do so.

“I’m led by the spirit to go normal today. Don’t be surprised if you see me the other way tomorrow. So, today is normal,” he enthused.

Responding to a question on whether the spirit was in tune and conformity with the ethics of the legal profession and dress code, Omirhobo bursted into laughter and later said; “What ethics are you talking about? Are you insulting my religion? Don’t try it o! Please, don’t insult my religion and the constitution according to the Supreme Court which says I should dress according to my religious attire.

“You want to insult the Supreme Court? Behave yourself. And for those who have got cause against me, please come to my shrine,” he said.

Omirhobo, who appeared at the Supreme Court in Abuja wearing his religious apparel and entered the courtroom before the commencement of the day’s proceedings, was bare-footed and tied a red wrapper atop his black pair of trousers which he rolled up to his knees and also had a gourd tied around his neck with a red piece of cloth with a feather pinned to his wig.

The human rights lawyer insisted that he was a traditionalist, stressing that his resolved to dress in his religious attire was based on the Supreme Court’s judgement that ruled in favour of Muslim students wearing the hijab in Lagos schools.

A Federal High Court sitting in Lagos on Monday refused to entertain Omirhobo owing to his attire which was at variant with the legal dressing.

Justice Ringim made the decision following Omirhobo’s bid to litigate his suits marked FHC/L/CS/929/2022 between Chief Malcolm Omirhobo) against the Federal Government of Nigeria and others, as well as suit FHC/L/CS/1392/2021 against the Nigeria Army and two others.

The bold move by Omirhobo, seems to have encouraged another lawyer as Dennis Ezekiel on Tuesday appeared at the same Federal High Court, Lagos wearing a rosary on his approved legal attire, saying that he was exercising his right to religious freedom following from the Supreme Court ruling on hijab.

In his words; “My name is Dennis Ezekiel. I’m a Christian, a Catholic and I’m professing my religion by appearing like this in court. It is my right, enshrined in Section 38 of the Constitution and laid down, enunciated by the Supreme Court (in its) judgment (on hijab).

“So, we have that constitutional right to profess our religion without let or hindrance,” he stressed.

The Supreme Court had on June 17, 2022 on an appeal by the Lagos State approved the wearing of a hijab in public schools by female Muslim students.

In a split decision of five to two, a panel of seven-member of the apex Court made up of five Muslims and two Christians had in its majority judgment, dismissed the appeal by Lagos State.