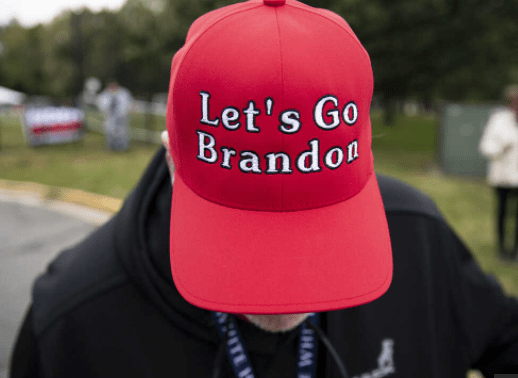 Roughly 250 years ago, a political insult by British troops during the American Revolution was converted into a rallying cry by the colonials.

“Yankee Doodle Dandy” was intended to mock the Continental Army as unsophisticated dandies, but the maligned militiamen turned it around to mock the British after defeats like Yorktown. The song is a lasting example of how symbols of contempt can become symbols of defiance.

In a curious way, “Let’s Go Brandon!” has become a similarly unintended political battle cry. It derives from an Oct. 2 interview with race-car driver Brandon Brown after he won his first NASCAR Xfinity Series race.

During the interview, NBC reporter Kelli Stavast’s questions were drowned out by loud-and-clear chants of “F*** Joe Biden.” Stavast quickly and inexplicably declared, “You can hear the chants from the crowd, ‘Let’s go, Brandon!’”

Stavast’s denial or misinterpretation of the obvious instantly became a symbol of what many Americans perceive as media bias in favor of the Biden administration.

Indeed, some in the media immediately praised Stavast for her “smooth save” and being a “quick-thinking reporter.” But the episode was reminiscent of a reporter standing in front of burning buildings during last year’s riots and calling them peaceful protests. Indeed, even the original profane chant seemed directed as much at the media as Biden — creating an undeniable backdrop to news coverage.

The three-word slogan is now emblazoned across tee-shirts, coffee mugs and even billboards. An anti-Biden “Let’s go, Brandon!” hip-hop song hit the top of the charts on iTunes; soon, there were four such songs with the same refrain.

The top song was banned on sites like YouTube and Instagram as spreading “harmful false information.” Yet the effort to bar people from listening to the song only fueled the interest and the movement.

The media’s reaction has fulfilled the underlying narrative, too, with commentators growing increasing shrill in denouncing its use. NPR denounced the chant as “vulgar,” while writers at the Washington Post and other newspapers condemned it as offensive; CNN’s John Avalon called it “not patriotic,” while CNN political analyst Joe Lockhart compared it to coded rhetoric from Nazis, the Ku Klux Klan and ISIS.

The more the media has cried foul, however, the more people have picked up the chant.

Then a Southwest Airlines pilot reportedly used the expression at the end of a signoff with passengers on a flight from Houston to Albuquerque. Associated Press reporter Colleen Long apparently was so irate that she demanded access to the cockpit and was almost expelled from the flight.

She admits that “I was asking them to open locked cock pit and probably sounded insane!” Washington Post editor Cathleen Decker described the use of the slogan as a “vulgarity stand-in from @SouthwestAir cockpit.”

Liberals called for an investigation and the firing of the pilot. CNN analyst Asha Rangappa even compared the pilot to an ISIS sympathizer: “As an experiment, I’d love for an @SouthwestAir pilot to say ‘Long live ISIS.’”

But what if the pilot had simply knelt in protest of the Biden administration as passengers boarded or deplaned? Well, many of these same commentators have supported the NFL’s kneelers and insisted that any effort to prevent their protest was racist or a denial of free speech.

As I wrote previously, employees do not have a right to protest on the job, whether in Starbucks or in sports stadiums. Nevertheless, when then-President Trump condemned the NFL kneelers as unpatriotic, some Democrats in Congress called for his impeachment. When the late Supreme Court Justice Ruth Bader Ginsburg also criticized the kneelers, journalist Katie Couric edited out most of her comments.

The fact is that neither the Southwest pilot nor Colin Kaepernick have a legal right to protest at work. I also believe it is inappropriate for a pilot to use his position — and the captive audience on his plane — to proselytize or politic.

“Let’s go, Brandon!” is as much a criticism of the media as it is of President Biden, however. Many in the media have embraced advocacy journalism and rejected objectivity in reporting; in their view, readers and viewers are now to be educated rather than merely informed.

Many reporters reject “both-sidesism,” the need to offer a balanced account of the news. Thus, stories like the Hunter Biden laptop scandal were killed before the 2020 presidential election by Twitter and most media companies. After Biden was elected, some media belatedly confirmed the authenticity of the laptop.

We live in an age of unprecedented censorship by private companies. The media has shown that you can have an effective state media without direct regulation by the state — because today’s media adheres to common narratives out of ideological or economic interests, without the threat of state coercion.

The Biden administration and the National Science Foundation are funding research on a new tool designed to give media an even more immediate response to “misinformation.” The $750,000 grant to Temple University tracks news reports as part of a “Trust & Authenticity in Communication Systems” initiative.

But the effort to “rebuild the Nation’s news trust” is premised on flagging content that might result in “negative unintended outcomes” like “the triggering of uncivil, polarizing discourse, audience misinterpretation, the production of misinformation, and the perpetuation of false narratives.” Such algorithms promise even greater consistency in messaging and framing of the news.

In other words, “Brandon” is going to get even more popular, because such efforts are not really working.

Biden’s popularity has tanked despite an openly protective and enabling media, with 71 percent of the public believing the country is going in the wrong direction, according to one poll. The reason is that the media is now singing from the same choirbook, while most Americans have tuned it out.

That brings us back to “Yankee Doodle Dandy” and the perils of mockery. Many Americans interpreted the false race-day account as an act of open contempt for viewers who were expected to simply believe what they were told was happening, despite seeing and hearing something else.

Instead, they have now used that phrase as a rallying cry for defiance. It’s their way of telling both the president and the media to “mind the music and the step” because they are marching to a different tune.

Jonathan Turley is the Shapiro Professor of Public Interest Law at George Washington University. You can find his updates on Twitter @JonathanTurley.