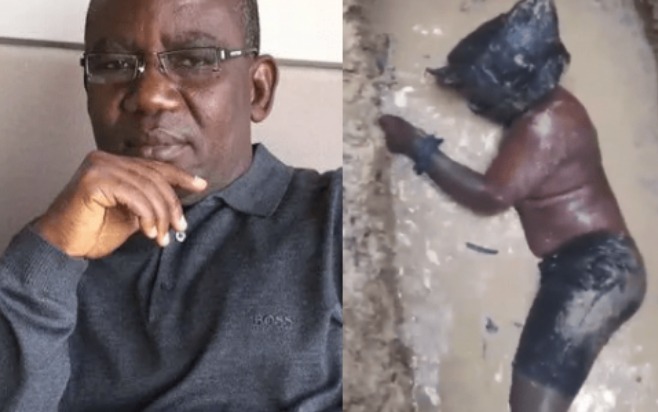 Editorhttps://moneycentral.com.ng
Former commissioner in Bayelsa state and a cousin to Former president Goodluck Ebele Jonathan was being kept in a grave by kidnappers who threatened to take his life

Mike Ogiasa, an Engineer was kidnapped on June 4, 2022 in his hometown of Otuabadi in Ogbia Local Government Area.

The victim, who was a Special Adviser on Power Development during the administration of former Governor Seriake Dickson, is also the Convener of a socio-political group, Voice of the South-South (VSS).

In the 27 seconds video which Monrycentral obtained, Ogiasa is seen half-naked in a flooded grave.

His hands were tied, as he cries out for urgent help.

It was reported that the gunmen, numbering about eight, attacked Ogiasa, a former Commissioner for Special Duties in charge of federal projects in the state, from Otuogidi in the Ogbia Local Government Area of the state.
Ogiasa, who also served as Special Adviser on Power to the state government, had finished attending a meeting before his assailants swooped on him.
The abduction had been confirmed by the Police Public Relations Officer, Bayelsa State Command, Asinim Butswat.

According to Butswat, a combined investigative effort involving security agencies had been launched with a view to rescuing Ogiasa and arresting the culprits.

🎥▪️BREAKING: Former Commissioner In Bayelsa State, Mike Ogiasa And Cousin To Ex Nigerian President Goodluck Jonathan, Begs For His Life At The Hands Of Kidnappers.

He May Be Killed Soon If Nothing Is Done Urgently To Help Him. Very Tragic@UN @simon_ekpa
Give Us Biafra
Biafra pic.twitter.com/mhExMwjrQ3