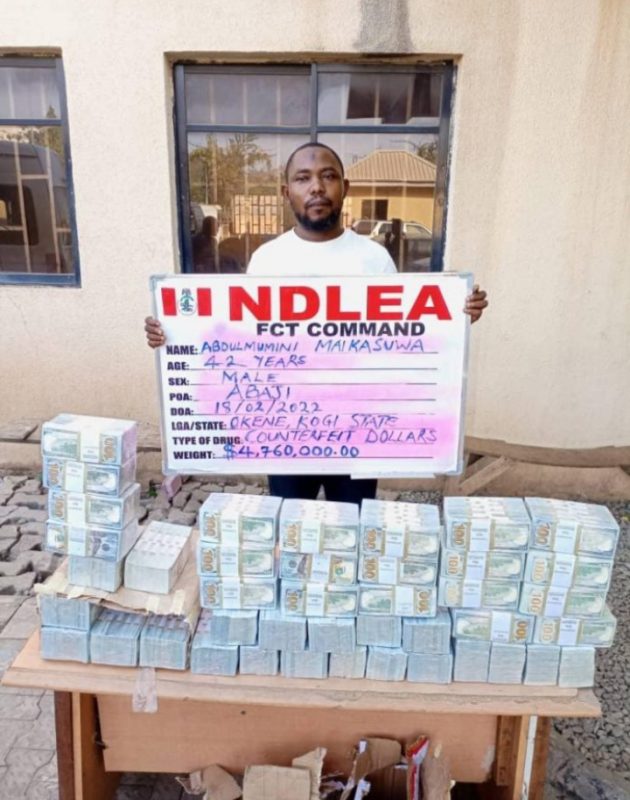 Operatives of the National Drug Law Enforcement Agency, NDLEA, have foiled attempt by a syndicate to steal at least N2.7 billion from the Nigerian economy by pushing into circulation fake $4.7 million cash.

The operatives had in the early hours of Friday 18th February 2022 intercepted a consignment sent from Lagos to Abuja at Abaji area of the Federal Capital Territory. A controlled delivery of the parcelled counterfeit US dollars totalling $4, 760, 000.00 led to the arrest of a principal suspect, 52-year-old Abdulmumini Maikasuwa.

The seizure followed intelligence received by the FCT Command of the Agency detailing the movement of the cash and the vehicle conveying it. Meanwhile, Chairman/Chief Executive of NDLEA, Brig. Gen. Mohamed Buba Marwa (Retd) has directed that both the cash and the suspect in custody be transferred to the Economic and Financial Crimes Commission, EFCC, for further investigation.