The judge handling the case between Mazi Nnamdi Kanu, the leader of the Indigenous People of Biafra (IPOB) and Federal Republic of Nigeria, Justice Benson C. Anya has pronounced the use of the military in and around court premises illegal and unconstitutional.

He handed down the judgement today at a high court in Umuahia, where Nnamdi Kanu’s lawyer, Aloy Ejimakor, had gone to seek the prayer to stop the federal government from using the military to intimidate his team and other interested parties in the case.

Justice Anya frowned at the decision of the security agencies to block access roads to the court and called it an unconstitutional act and abuse of court integrity and sanctity.

He ordered that no arrest must be made by security agencies in the vicinity of the court without the express permission of the judge, saying people must be allowed to carry out their lawful duties without intimidation.

He also ordered that the military should be withdrawn, leaving only prison officials and policemen, who are statutorily allowed in courts, to reflect the judiciary as a truly democratic institution.

After handing down the judgment, Justice Anya adjourned the case till December 10 2021.

The full text of the judgement reads:

“Following the Court proceedings in the case of HIN/FR/14/2021 Mazi Nnamdi Kanu Vs Federal Republic of Nigeria and 7 Ors on this 19th day of November, 2021.

“THIS HONOURABLE COURT HEREBY ORDERS AND DECLARES AS FOLLOWS:

“That the Security Agencies are hereby restrained from Barricading and Blocking Access Road to the High Court of Abia State or that of any Court of Law unless the Head of the Court so requests in writing.

“That there must not be any arrests in the premises and vicinity of any Court particularly in this Court except as ordered by a Court of competent jurisdiction.

“That Legal Practitioners, Litigants and the Members of the public must be allowed free access to the Court without let or hindrance

“That in administration of justice only the prison officials and policemen posted on official Court duties are allowed within the Court of law and it is so ordered.

“That it is hereby declared unlawful to restrict the citizens and members of the public access to the Court Room and the Court premises during the working hours of the Court.

“That it is also declared that the act of barricading the Court, blocking roads leading to the Court and impeding access to the Court premises and Court Rooms in a Democratic society by any person under any guise is unconstitutional, illegal and abuse of the integrity and sanctity of the Court of Law.

“That the Judiciary is a Democratic institution with a mandate to protect the Rights of any person or persons who approach the Court to ventilate their grievances. It is unlawful to militarize it or cause the Court to perform its function under the force of Arms.

“THAT IT IS FURTHER ORDERED that the Federal Government and all parties concerned must protect the sanctity of the Judiciary, the freedom and constitutional Rights of the people.

Below are copies of the judgement 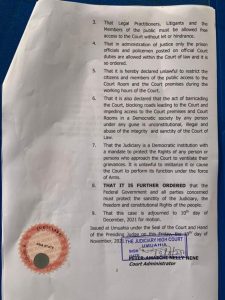 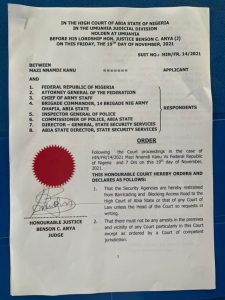