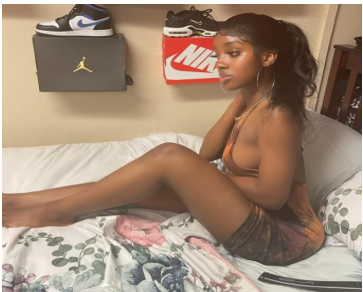 Kelly Bhadie, the popular Togolese TikTok star, has reacted to the leak of a s3x tape that social media users claimed involved her.

Last week, a video surfaced and went viral on social media in which a lady with a striking resemblance to Kelly was seen enjoying her moment with a man.

A huge number of users had claimed the lady in the video was the TikTok star.

Reacting to the claims in a recent TikTok video, Kelly said she is unperturbed about what people are saying.

“Idgaf (I don’t give a f**k) what nobody says,” read the caption of her video.

The social media influencer had earlier said she isn’t the one in the viral s3x tape.