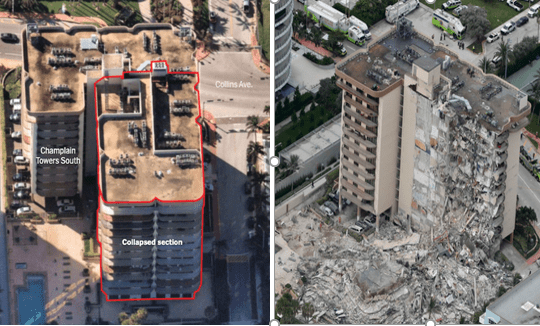 The hunt for survivors has been ongoing for more than 12 hours since the Champlain Towers, a 12-story condo building, collapsed in the early morning hours in Surfside, Miami Florida.

“This process is slow and methodical,” Ray Jadallah, a Miami-Dade Fire Rescue assistant fire chief, said Thursday afternoon. “Anytime we started breaching parts of the structure, we get rubble falling on us.”

So far, at least one person was killed in the collapse. Officials warned there could be more fatalities.

“Fire and rescue are in there with their search team, with their dogs. It’s a very dangerous site right now. Very unstable,” Miami-Dade Police Director Freddy Ramirez told reporters. “They’re in search-and-rescue mode, and they will be in that mode for a while. They are not quitting. They’re going to work through the night. They are not stopping.”

Ramirez said the number of casualties and people missing is still not entirely known at the moment.

“I don’t want to set false expectations,” he said. “This is a very tragic situation for those families and for the community.”

The Champlain Towers South had 130 units, approximately 80 of which were occupied. The building, which was constructed in 1981, was in the process of being recertified, with several repairs being done.

Every forty years, a recertification process for condo buildings in the area is performed to see if it satisfies structural standards.

When news broke of the collapse, Shimon Wdowinski, a professor in the Department of Earth and Environment at Florida International University, remembered a study he completed on the condo building in the 1990s. He found the tower was sinking 2 millimeters a year in the 1990s.

“I looked at it this morning and said, ‘Oh my god.’ We did detect that,” he said.

Wdowinski said his research is more than two decades old, and the sinking may have decreased or accelerated.

My thoughts and prayers are with all of those impacted by the building collapse in Surfside, Florida. Thank you to the incredible First Responders and Law Enforcement for arriving so quickly on the job, as always. We wish Governor Ron DeSantis, and all of those representing the Great State of Florida concerning this tragic event, Good Luck and God Speed. I am with you all the way!

With a third or more of the condo building completely pancaked, search and rescue teams will work through the night.