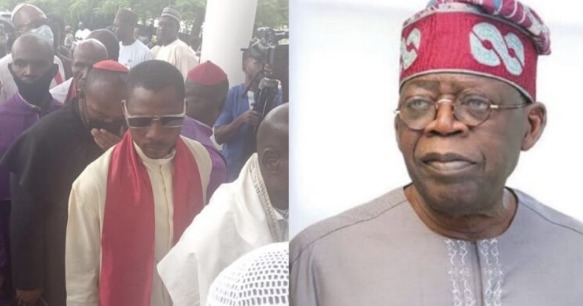 Nigerians have leapt on Bola Tinubu on Twitter for making his case worse by parading forged Bishops when he presented on Wednesday Kashim Shettima as his presidential running mate on the banner of the All Progressives Congress (APC), a Muslim-Muslim takeover bid of Nigeria Christians decry.

One of the scam Bishops, Joseph Odaudu, confirmed that Team Tinubu paid him N40,000 for the hatchet job but it makes him angry because it is a breach of their mutual agreement that he would be paid N100,000.

“They came to meet us at the car park behind Eagle Square and they promised to give me N100,000. They bought food for us and took us to another place where they gave us clothes to dress like Christian leaders and reverend fathers,” Odaudu told reporters shortly after the event at Shehu Musa Yar’Adua Centre, Abuja

“I am a Christian and I am supporting Tinubu but I hate when people lie and fail to deliver on their promises.”

The fake Bishops appeared in cassock at the event to give Christian voters a false impression that Tinubu’s Mujahideen plot with a Northern Muslim means well for Nigeria despite strident running criticism from Christians North and South.

The two largest Christian bodies in the country, the Christian Association of Nigeria (CAN) and the Pentecostal Fellowship of Nigeria (PFN), had asked genuine Christians not to attend the ceremony, to avoid giving a hint of approval.

The Catholic Church said it had no representation at the event and described those who appeared there in cassock as “impostors”.

When Odaudu was asked if he knew it is illegal to disguise as a Catholic Bishop, he insisted he did not break any law.

“No law was broken we only tried to show Nigerians that Christians are solidly behind Asiwaju Tinubu,” said Odaudu, a paid agent.

Below is a snapshot of the reactions of Nigerians on Twitter, per reporting by The PUNCH.

“The APC is fielding a Muslim-Muslim ticket but went to rent fake bishops. What sort of ridicule is this? What message do they think this will send?”

“Can you help to publish the name of the female bishop at your occasion today? Nigerians are curious.”

“APC rented bishops at the unveiling of their vice-presidential candidate, Mallam Kashim Shettima. They are so desperate for validation.”

“Why do you think fake bishops need to be used at the unveiling of Shettima? That is waste of time. There are many that will be honoured to be invited.

“Most religious rulers need bad governance to sell cheap miracles whether pastors or Mallams. Know this and have peace.”

“I thought it was only fake Peter Okoye that is trending… They even created fake bishops today! God why?”

“Bishop spotted in the APC show of shame with Muslim prayer’s mat No be juju be that?”

“Unknown bishops: If the Christian votes are not important to Tinubu and the APC, why this shameful make-believe desperation to win us over.

“Honestly, these are symptoms of a man that can kill a race for power.”