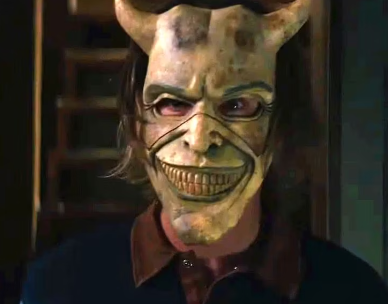 It’s poetic justice at the box office for director Scott Derrickson and his longtime writing partner C. Robert Cargill as their latest collaboration, the horror film The Black Phone, has passed $100 million at the global box office.

Derrickson and Cargill dropped out of Doctor Strange in the Multiverse of Madness, which would’ve marked their second partnership with Marvel, in favor of the significantly smaller-scale Blumhouse chiller.

Based on the short story by Joe Hill, The Black Phone was released exclusively in theaters at a time when most horror films are being offloaded to streaming.

It reunited Derrickson with his Sinister star Ethan Hawke, who plays a terrifying child abductor called The Grabber in the film.

Produced on a reported budget between $16 million and $18 million, The Black Phone is yet another win for Universal, whose Minions: The Rise of Gru and Jurassic World Dominion are also doing gangbusters at the box office as we speak.

You can read the film’s official synopsis down below:

Finney Shaw, a shy but clever 13-year-old boy, is abducted by a sadistic killer and trapped in a soundproof basement where screaming is of little use. When a disconnected phone on the wall begins to ring, Finney discovers that he can hear the voices of the killer’s previous victims. And they are dead set on making sure that what happened to them doesn’t happen to Finney. Starring four-time Oscar® nominee Ethan Hawke in the most terrifying role of his career and introducing Mason Thames in his first ever film role, The Black Phone is produced, directed, and co-written by Scott Derrickson, the writer-director of Sinister, The Exorcism of Emily Rose and Marvel’s Doctor Strange.