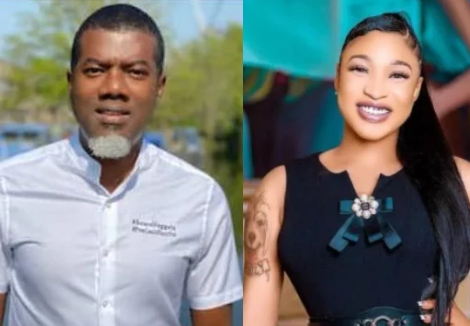 He compared the relationship between Tinubu and the ruling President Muhammadu Buhari to the failed relationships of Nollywood stars, Nkechi Blessing and Tonto Dikeh.

Reno Omokri claimed Tinubu behaves like Tonto Dikeh and Nkechi Blessing, who are exploding on the internet after they were promised marriage but never got to the altar.

Reno Omokri, in a lengthy Instagram post, wrote: Tinubu is just behaving like Tonto Dikeh and Nkechi Blessing. Like a woman who was promised marriage and jilted and is now exploding and exposing the jilter. Buhari don buy market. He either builds another ‘other room’ for Tinubu, or marry him as promised! 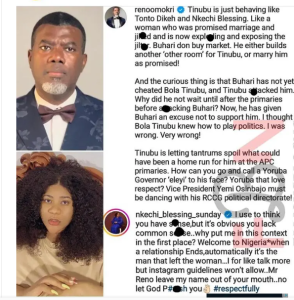 And the curious thing is that Buhari has not yet cheated Bola Tinubu, and Tinubu attacked him. Why did he not wait until after the primaries before attacking Buhari? Now, he has given Buhari an excuse not to support him. I thought Bola Tinubu knew how to play politics. I was wrong. Very wrong!

Tinubu is letting tantrums spoil what could have been a home run for him at the APC primaries. How can you go and call a Yoruba Governor’ eleyi’ to his face? Yoruba that love respect? Vice President Yemi Osinbajo must be dancing with his RCCG political directorate!

In response to Reno Omokri’s jab, Tonto Dikeh took to her instagram page to tag reno an Atiku’s house boy. 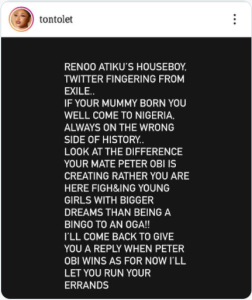