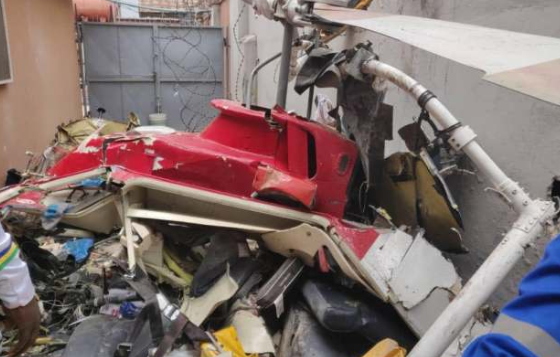 There is panic in Opebi area of Ikeja, Lagos as a helicopter has reportedly crashed into a building. The incident occurred at about 12. 17pm, at Salvation Road, Opebi, Lagos.

Femi Oke-Osnyintolu, Director General, LASEMA, said three people were on board the aircraft when it crashed.

According to him, one person was in intensive care unit at the Lagos State University Teaching Hospital, LASUTH, while the two dead bodies had been deposited in mortuary.

“The helicopter was carrying three (3) people, one is in the intensive care unit at the Lagos State University Teaching Hospital while the other two were killed on impact and there bodies has been deposited in mortuary .

“We are on top of challenges, especially crowd control. Operation is ongoing and updates will follow,” he said.

The helicopter is said to belong to Quorum Aviation.