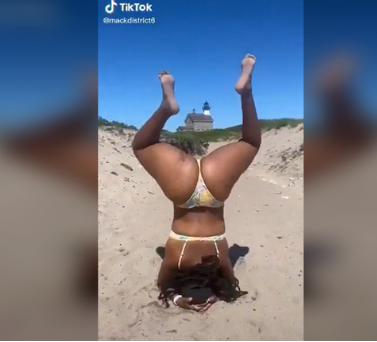 Rhode Island State Senator Tiara Mack, a Democrat, released a campaign video on Monday in which she performs an upside down ‘twerk’ and calls for votes. Mack called the conservative reaction to her stunt “unhinged.”

In the video, posted to TikTok, a bikini-clad Mack stands on her head and shakes her buttocks, before asking viewers to “vote Senator Mack!”

The bizarre campaign pitch was met with outrage by some conservatives, as well as memes and mockery from others.

“If I had one of these maybe I’d be sitting in Congress right now,” quipped Naomi Levin, a former Trump campaign official who unsuccessfully ran for a House seat in New York in 2018.

Mack herself was unapologetic. When a commenter suggested that she had “done women struggling to be taken seriously a grave disservice,” she shot back that she was “still an Ivy League graduate and sitting state senator.”

“Damn,” she tweeted. “Twerking upside down really makes the conservative, unhinged internet accounts pop off on a Monday.”

Mack was elected to the Rhode Island State Senate in 2020 and is running for reelection this year. She has courted controversy before, most notably in February when she sponsored legislation that would require schools to teach kids in sixth grade about gender and sexual orientation and “affirmatively recognize pleasure-based sexual relations.”

The bill faced pushback from Republicans and some teachers, one of whom told the Providence Journal that “there is no place in school to discuss pleasurable sex. If I thought a teacher was talking about an orgasm, I’d want her job.”

A former sex education teacher, Mack said that “teaching comprehensive, queer inclusive, pleasure based sex ed was a highlight of my time teaching.”

Share
Facebook
Twitter
Pinterest
WhatsApp
Previous articleCommercial Bus Driver Strips Naked, Excretes on His Hand and Rubs it on LASTMA Officers Who Tried to Arrest Him (video)
Next articleAPC Stakeholders Call For Improved Security Ahead Of Elections
- Advertisement -