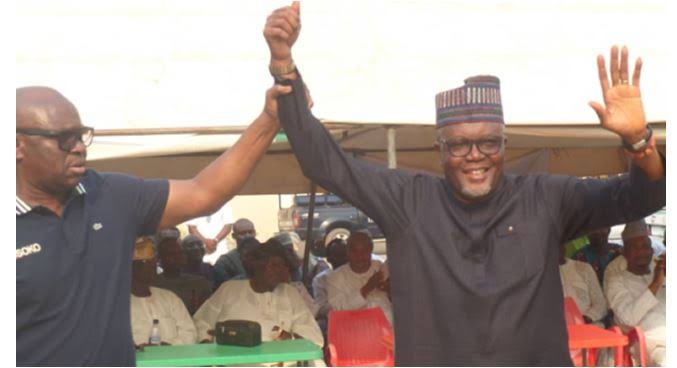 Former Governor Ayodele Fayose has again proved his stranglehold on the Peoples Democratic Party (PDP) in Ekiti State with his anointed aspirant, Bisi Kolawole dusting other contestants to emerge as the opposition party’s candidate for the June 18, 2022 governorship poll in the State.

At the Party governorship primary held in Ekiti on Wednesday, January 26, Kolawole polled 671 votes to defeat his closest rival and former governor Segun Oni, who got 330 votes out of a total of 1200 delegates that participated in the primary.

Announcing the results, the Chairman, Ekiti PDP gubernatorial primary election and Akwa Ibom State Governor, Mr. Udom Emmanuel, said a total of 1,185 votes were cast during the exercise, with Kolawole amassing 671 to defeat Oni and other aspirants.

According to Governor Emmanuel; “Bisi Kolawole, having scored the highest number of votes cast in this election, is hereby declared the winner in accordance with the guidelines of our party”.

While congratulating all the aspirants, the Akwa State governor said the process was purely PDP’s internal affairs and urged all members to act in good faith in the overall interest of the party going into the June 18 elections.

Some PDP members described the primary election, held at the Great Eagles Hall in Ado Ekiti, as being peaceful and hitch-free.

Reacting to his victory at the poll, Kolawole praised the party leadership for providing a level playing ground for all aspirants, noting that no breach of security and untoward behaviours were witnessed during the exercise.

He said; “Let me commend someone who is a good coach who discovered me. He just has seen something in me or read my antecedents. He is a wizard. I thank him for willingly giving me his endorsement making me the winner of this primary. The person is former governor Ayodele Fayose.

“Today, I want to say that we are all winners. Engineer Segun Oni is my brother and friend and I know that he will support this process. I want to commend other aspirants and appreciate them. Nobody can do it all alone.

“We are committed to delivering the people from sufferings being meted out to them in the last three years. You could all attest to the fact that the process of this election was free and fair, so I willingly accept to be the flagbearer of our great party in the forthcoming governorship election in Ekiti”.

However, citing cases of bias and fraudulent practices, the Senator representing Ekiti South, Mrs Biodun Olujimi, had notified the Committee of her withdrawal from the race.

Senator Olujimi told newsmen that her decision to withdraw from the primary was informed by alleged irregularities during the delegates’ accreditation, saying she could not be part of a political process that excludes party delegates who are mainly her supporters.

Maintaining that development runs against the tenets of participatory democracy, she said; “I pulled out because every other aspirant has full compliments of delegates from their local government. It pleased the party to give me only 12 automatic delegates in mine.”

“And in the second local government, they gave me only ten delegates. How do you go from your home with a broken hoe and then, you are going to ask the people to give their own to you to till the ground?”.

Chiding the party leadership as being unfair to her; Senator Olujimi said; “I feel maybe it is because of my gender or maybe the party feels I have not done enough for it. That is why they would have done that to me. So, when they’ve done that to me, it didn’t make sense to continue with the process.”

On the party’s decision to give automatic delegates to aspirants, the lawmaker said: “What happened was that for two years, we’ve been fighting over an illegal congress and somehow, a few weeks ago, they approved it for one group.”

“There have been two groups that have been fighting. And we said there was no congress because it was hijacked. Two weeks ago, the party approved that one group should take all the fourteen executives, and those of us that had been fighting should wait.”

Senator Olujimi, who dismissed insinuations that she had stepped down for an aspirant, said good judgment only prevailed in pulling out of the race and instructing her supporters to vote for any aspirant of their choice.

The winner, Kolawole, who hails from Efon in Ekiti Central Senatorial District, was an elected member of the Ekiti State House of Assembly in 2007 and thereafter appointed the Commissioner for Environment by Governor Fayose in 2014.