2023: Is Osibanjo’s Declaration A Threat To Tinubu? 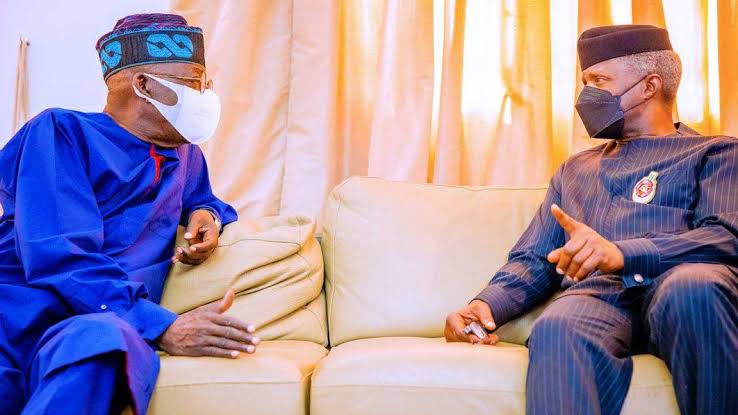 No doubt that many experienced politicians and technocrats have shown interest in becoming the next president of the federal republic of Nigeria, as the nation is in her political process that is expected to ushered in new sets of leaders across the country come 2023.

As the tenure of the imcubent president, Muhammadu Buhari is gradually widen out. The nation’s electoral umpire; the Independent National Electoral Commission ( INEC ) has according to the provision of the constitution of the federal republic of Nigeria dolled out her elections time-table, being a guide to all registered political parties.

It is against this backdrop that stakeholders and political parties are on the match to meet the stated conditions and not to be left out in the race, especially for those interested in the presidency.

The tenure of President Buhari is expected to be terminated precisely in May 29, 2023. Due to this, there are agitations especially from the Southerners that the north is already having its straight eight years, saying that political power be shifted to the Sourthern region, while also urging all political parties to ensure that their flag-bearers are filled from the South.

Though, to the ruling All Progressives Congress ( APC ), it is clear that the presidency has been zoned to the South, considering the fact that president Muhammadu Buhari is a product of the north and the latest National Chairman of the party is also from the north. However, the issue of zoning as continued to remain a contentious issue due to its lack of constitutional backing.

In the case of the leading opposition party; People’s Democratic Party (PDP), the coast is yet to be cleared due to the following factor that the north and some stakeholders within the party are holding on to. Recall that the immediate past President of Nigeria; Goodluck Ebele Jonathan who spent bearly seven years on the platform of the PDP is a Southern. This, being the reason why some Nigerians have argued that the party’s flag-bearer must come from the north.

On the issue of zoning, the PDP has been going forth and back with her political calculation on how to wrest power from the APC, this is just as many political analysts have also argued that the best political gimmicks for the PDP to take over power in 2023 is to have a Presidential candidate from the north.

But for the theory of fairness and unity of the nation, many have also opined that all political parties should zone their presidential ticket to the South. This demand, is in no doubt an advantage to the long nursing ambition of the APC National Leader, Asiwaju Bola Ahmed Tinubu. In the few months Tinubu has wholly committed himself to this course like never before in both health and wealth. Through consultations, meetings and travellings.

Despite the political staminal of the Asiwaju Bola Ahmed and being the national leader of APC, the fact remains that the Vice President can not be easily pushed away in this political dispensation. While also, Osibanjo’s declaration might have recieved wide blessings in the South-West and even in Aso Rock.

Also, information has it that both the party, the leadership of the Senate, House of Representatives, APC Governors and party loyalists are currently having divergent opinions on who takes the party’s Presidential ticket.

The question on the lips of many Nigerians now is Osibanjo’s declaration a threat to Tinubu?