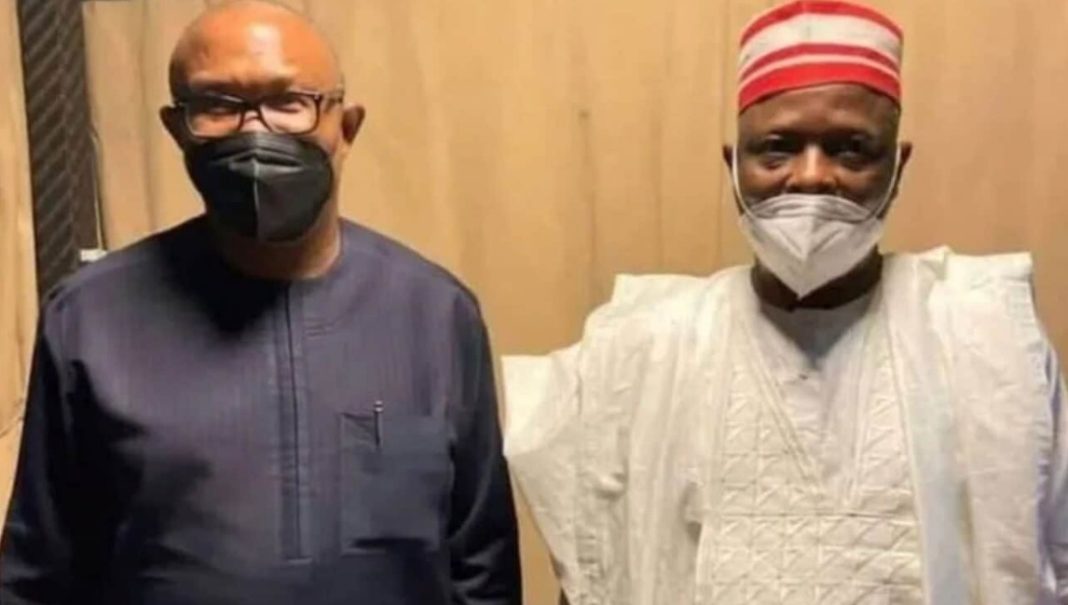 There are conflicting signals over moves to see merger talks between the Labour Party (LP) and New Nigerian Peoples Party (NNPP) blossom into a formidable third force ahead of the 2023 presidential elections.

At the weekend, both the Head, of the Public Affairs Directorate of NC Front, Dr. Yunusa Tanko, and the National Publicity Secretary of NNPP, Dr Agbo Major, in separate interactions with newsmen said the bond between LP and NNPP has not broken down.

The Pat Utomi-led NCFront spearheaded the coalition that midwife the adoption of Peter Obi as the presidential candidate of the Labour Party.

Tanko said the candidature of Obi had grown beyond his political platform into a mass movement, which Nigerians across ethnoreligious and sectional divides were identifying with.

But a chieftain of the NNPP, Buba Galadima, yesterday, dismissed the rumour that the presidential candidate of the party, Rabiu Musa Kwankwaso, and his LP counterpart, Obi, are planning a merger.

Galadima, who spoke during a chat with Arise TV, said what the two presidential candidates are discussing is an ‘electoral alliance.’

“I chaired the negotiation for 13 good hours and we have an understanding on almost all the issues raised except one – which is who should be the presidential candidate and who should deputise for him.”

Galadima also stated that those who are saying it is “insulting” to ask Obi to be Kwankwaso’s running mate “are not politicians, because if they were politicians, they wouldn’t even have dreamt of that.”

He added that while the Peter Obi movement started only two months ago, Kwankwaso’s ‘Kwankwasiyya movement’ has been in existence for 32 years.

“They (LP) are just starting a movement. The Kwankwasiyya movement has been on the ground for 32 years. And the main objective of the movement is to make sure that Senator Kwankwaso becomes the president of Nigeria because he has a lot to offer, and no Nigerian living today has ever performed while in public office like Kwankwaso has done,” he said.

The former chieftain of the defunct All Nigeria People’s Party (ANPP) further stated that Kwankwaso is a stronger candidate than Obi in Northern Nigeria, and giving the presidential ticket to the latter would benefit Atiku in the North.

“If Kwankwaso deputises Obi, it is not the ticket of Obi that will gain currency, it is Atiku that will benefit because as far as we are concerned if Kwankwaso steps down to be vice-presidential candidate, the people from this part of the country are likely to vote one of their own who is running as president.

MEANWHILE, the national leadership of LP and its presidential candidate, Obi, have been advised to stop further merger negotiations with NNPP and its standard-bearer, Kwankwaso. A director in the Peter Obi Support Network (POSN), Mr. Jones F. C. C. Onwuasoanya, who made the call, noted that Kwankwaso’s appearance at the Channels Television programme on Sunday left no one in doubt that he was not ideologically aligned with Obi and LP.

Onwuasoanya noted that “an in-depth analysis of Kwankwanso’s utterances and arguments on the TV programme gives the disturbing impression that the former Minister of Defence might be aiming to be an ethnic-inspired candidate, rather than a new Nigeria patriot and advocate, which the Obi campaign is hinged on.

“It bears reiterating that Obi is not motivated by any ethnic, sectional or religious sentiments, nor is he banking on the votes of a particular section of the country against the other, but inspired by the dream too, working together with like-minds, accomplish a working, productive, secured and equitable Nigeria for all, and through the votes of all Nigerian patriots from all sections and classes of Nigeria.”

While insisting that Kwankwanso’s motivation and confidence in vying for the presidency are clearly rooted in some self-serving ethnic and class biases, he declared that “such an individual shouldn’t be allowed to taint the purely progressive, selfless and people-inspired aspiration of Obi and many well-meaning Nigerians.”

According to Onwuasoanya, the former Kano State governor “is not ideologically inclined to Obi or the Labour Party, especially, on the key issues driving the former Anambra governor’s aspiration to the presidency.”

His words: “Kwankwanso has regrettably manifested a most distasteful understanding of the Nigerian situation, as he advertised himself as primarily hinging his aspiration to the presidency on the basis of where he comes from, rather than where he wants to take Nigeria.

“By arguing that his candidacy is propelled by the North, rather than by Nigerians and also emphasising our ethnic differences rather than blunting them, we should understand that Kwankwanso sharing a ticket with Obi will alienate genuine Nigerian patriots, who have bought into the Obi candidacy out of their conviction that it is a unifying, ideas-driven and masses propelled pan Nigerian project.”

The POSN director regretted that Kwankwaso had to come on national television, even while the alliance talks were yet to be finalised, stressing that that “categorically foreclose the chances of pairing with Obi as running mate.

“Kwankwanso has shown himself as coming to the alliance negotiations with a closed mindset and as a self-centred manipulator rather than being open to superior ideas, logic and credible electoral and political data or having the slightest pretext to patriotism.”

ALSO, the apex Igbo socio-cultural organisation, Ohanaeze Ndigbo, said, yesterday, that Kwankwaso does not have the competence to assess the Igbo, stressing that it does not reckon him as presidential material.

Ohanaeze Ndigbo stated that Ndigbo was long prepared for the presidency of the country, insisting that any person that had done well in business will do well in any other venture.

Ohanaeze Ndigbo was reacting to Kwankwaso’s description of the Igbo nation as “politically immature to win the presidency,” adding that the highest political position Igbo could occupy in the country was the vice presidency.

But responding to the former governor of Kano, National Publicity Secretary of Ohanaeze Ndigbo, Dr Alex Ogbonnia, stated that injustices and conspiracy of the political elite had denied Igbo opportunity to rule the country before now.

He insisted that the Igbo remained part of the country’s best in politics, technology, economy, sports, education and several other fields and have continued to contribute to the success of every administration in the country.

Ogbonnia explained that the long hatred shown to Ndigbo by the rest of the country had not dwarfed their successes in various endeavours, stressing that had the people of the zone received as much support as other zones had received, it would be difficult for any section of the country to compete with it.

“I do not think he has evidence to back his position because as far as I know, Igbo have been the pillar that has helped this country to survive so far. He should know that any person who can do well in business and live in any part of the country can succeed as president. Igbo understand this country and can do better if given the opportunity.

“Kwankwaso cannot be said to be the best material the country can have when issues of the presidency are discussed. Except for our parochial nature and the kind of politics we have in Nigeria, I do not think that our competence should be in doubt at any time.

“So, we advise him to come off that mindset and pursue issues that will help this country come out of its present quagmire. It is not the Igbo that put the country in its present mess,” he said.

A chieftain of LP in Anambra State, Chief Dons Uzor, stated that Kwankwaso’s statement was made in a bad light, insisting that it shows a “man without agenda for the presidency.

“I think he should concentrate his campaign on what he can do to remedy the country that has been bastardised by his brothers. He should cover his face in shame that in all they claim to be in the North, they have succeeded in running the country down. If his people could not salvage the country, let them allow the Igbo man to go there and rescue it.

“This vitriolic attack and campaign of calumny will not stop an idea whose time has come. We are prepared to rule Nigeria anytime, any day just as we have succeeded in the things we do, so shall we succeed. Let them allow Obi to rule for eight years and let’s see whether there will not be a positive change in this country.

“Kwankwaso cannot claim he knows more than other Northerners that have ruled the country and the earlier he understands this and submits to superior reasoning, the better for him. Obi can never be his running mate. It is rather himself that should accept to become Obi’s running mate,” he said.

MEANWHILE, LP governorship candidate in Kaduna State, Shunom Adinga, has said he has established contact with the Islamic Movement in Nigeria (IMN) to seek their support for the party’s candidates, including Obi, in 2023. He said LP will try to ensure that all the aggrieved groups in the country are brought to the political forum to contribute their quota to the development of the country.

The LP governorship candidate, who disclosed this during a media briefing at the state party secretariat in Kaduna, also urged the IMN group and other Nigerians to support his candidature and that of Obi.

“We try as much as possible to bring aggrieved members of the society together such as the Shiites group, which is the El-Zazaky. We have consulted them. We have had a clear understanding with them to collaborate with the incoming government of Obi,” he said.