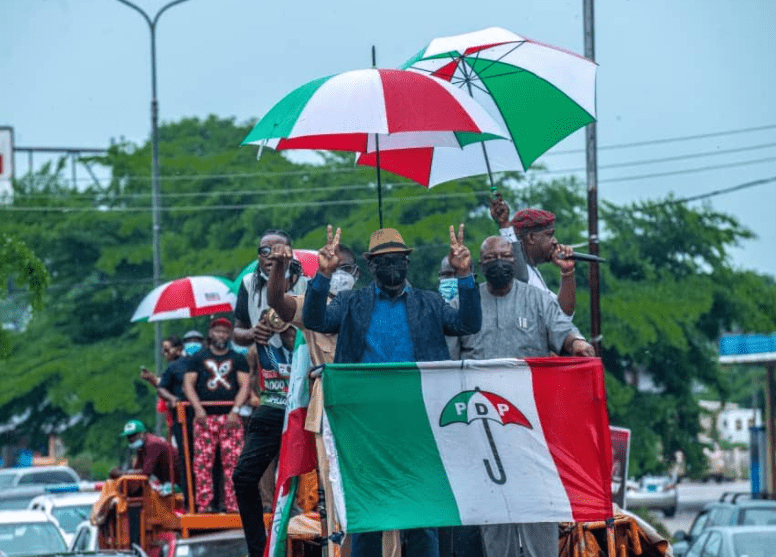 As its mandate ends Tuesday, the Peoples Democratic Party’s 37-man panel on zoning has opted to throw open its presidential ticket to all aspirants

The implication is that if the recommendation is approved by the National Executive Committee (NEC), all zones will be free to bid for the ticket.

According to a top source, the zoning of the presidential ticket was difficult for Ortom’s panel to decide because the party commenced the sale of nomination forms before setting up a zoning committee.

This made it tricky for the committee to be decisive on which zone will produce the presidential candidate.

A top source said: “Ortom’s committee has recommended that the presidential ticket should be thrown open because its hands were tied and it could not abort an exercise which was already midway.

“We knew this will be the outcome. The committee was dead on arrival because the party was already selling nomination forms before setting up the committee. Presidential aspirants from the North and South had already obtained forms.

“It has legal implications if you ask aspirants who have bought forms to step down or forego their rights to contest.

“The panel has shifted the final decision on its report to the National Executive Committee (NEC) of the party which may meet before the Easter break. As you know, NEC itself is divided.”

“Following the development from Ortom’s committee, Northern presidential aspirants were in a frenzy because it has brightened their chances of contesting the presidential primaries.

“If the Northern aspirants can agree on a consensus candidate among themselves, the nominee will now slug it out with the presidential aspirants from the South.

“Otherwise, all the presidential aspirants will go to the National Convention to struggle for PDP Presidential ticket.”

Meanwhile, it was gathered that the shuttle to Minna by Governor Nyesom Wike and three others did not achieve much because ex-President Ibrahim Babangida and a former Head of State, Gen. Abubakar Abulsalami were non-committal on the demand of the governors to support power shift to the South.

Another top source added: “The two former leaders avoided making a commitment to the governors. All they preached was about the need for peace, one Nigeria and the best for this country.

“The governors were a bit withdrawn that there was no categorical statement on whether power should remain in the North or shift to the South.

“They had gone to Minna with high expectations but the shuttle actually backfired.”

Other governors in the delegation were Seyi Makinde (Oyo), Okezie Ikpeazu (Abia) and Ifeanyi Ugwuanyi (Enugu).

Makinde expressed his readiness to work hand-in-hand with the advocates of consensus in a bid to put in place internally mechanisms that would clear doubts and confusion about the option.

The endorsement came during a private meeting of the team, led by Ex-Senate President and former Governor of Kwara State, Bukola Saraki to Makinde at the Oyo State Government House, Agodi, Ibadan.

The aspirants said they were on the visit to canvass the support of Makinde whom they described as a key stakeholder in the party, adding that they were ready to forgo their individual ambitions and support a consensus candidate in the interest of Nigeria.

Saraki, who said consensus was used to elect the party leaders at its last convention, explained that the option is not for any particular region, North or South, but for the PDP. He said anyone who wins the party ticket cannot address, fix and rebuild the country by himself but would need the support of everybody.

Saraki said: “We are here, the Governor of Bauchi State, Senator Bala Mohammed; Governor of Sokoto State, Aminu Tambuwal; Alhaji Muhammad Hayatudeen and my humble self, this afternoon to meet the governor of Oyo State, Seyi Makinde, a key stakeholder of our party.

“We have been going around, we who have indicated our interest to run for the positions of the President of this country under our great party. As a key stakeholder of our party, we need to come and brief him (Makinde) on what we meant by this idea of consensus arrangement that we are trying to put together.

“We have looked at the country today, the hardship our people are going through, with the issue of insecurity and it is clear that it is only our party, the PDP, that can provide that brighter future for this country.

“But, in doing that, we ourselves as a party must be ready for government in 2023 and that fact includes uniting ourselves and being focused. Is not about our individual difference, it is the interest of Nigerians that matters.

“We all of course have shown individual interest to be the President but we have decided in our meetings that we are ready to subject ourselves to a consensus arrangement.

“He needs the support of everybody and we want that foundation to start from that process and that is why we are all here.”

Makinde, who thanked the visitors, noted that the consensus being canvassed was successfully adopted at the last convention and could also be used to choose the presidential flag bearer for the 2023 election.

Makinde said: “I want to thank my senior colleagues for this visit and meeting.

“We have discussed behind closed doors and yes, the consensus arrangement we are trying to put together, we have done it at the last convention of our party, it was the first time that PDP was able to achieve bringing in a national chairman for the party through a consensus arrangement.

“So, we believe we can do it and we also believe that Nigerians will take this party seriously when they know that we are all working together to give to them a President through a process that has everybody’s buy-in, the stakeholders with no rancour.

“So, I promised my elder brothers that we will work hand-in-hand, work together to ensure that this consensus is successful.