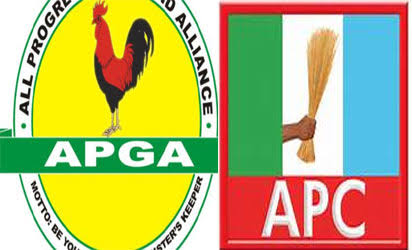 The National Coordinator of APGA Media Warriors, Chinedu Obigwe, stated this on Thursday in a telephone interview with our correspondent in Awka, the Anambra State capital.

Describing Uba as not being politically saleable to the people of the state, Obigwe said that was why the APC candidate was buying APGA members to help him form a structure

Obigwe’s reaction followed the defection of the deputy governor of the state, Dr Nkem Okeke, from APGA to the APC on Wednesday.

He said, “Ndi Anambra and Nigerians at large know that Andy Uba’s candidature is not acceptable even to the main APC stakeholders led by Senator Chris Ngige and George Moghalu.

“For that reason, he is struggling to make President Buhari believe that his candidature is enjoying wide acceptance by Ndi Anambra by buying over saboteurs to defect to the APC.

“Nkem Okeke and Senator Chris Ngige are from the same Senatorial zone and if Ngige is supporting Andy Uba, he is the person in the right position to take Nkem Okeke to President (Muhammadu) Buhari to be welcomed into APC by the President.

“The two people that did the introduction of Nkem Okeke to the President played the role of Ngige and such a thing happened because Ngige is not in support of Andy Uba.

“You cannot be taking those you claimed that they joined a ruling party at the federal level to the President without a serving minister that hails from the same state with them and that is incidentally the leader of the party in the state.”

Reacting to Obigwe’s claims, the Andy Uba Campaign Organisation described Okeke’s defection to the APC as a patriotic call.

A statement by the Director of Andy Uba Media Team, Afam Ogene, read in part, “We heartily welcome our deputy governor, Dr Nkem Okeke, an intellectual of no mean standing, who has over the years striven to steer the ship of Anambra State from the parochialism and maladministration which his principal, Governor Willie Obiano, has foisted on the state.

“For several years, Dr Okeke remained the only sane voice of reason in Government House, Awka, thus before long, he was easily sidelined by a Governor Obiano who elevated his wife to the status of co-governor.”