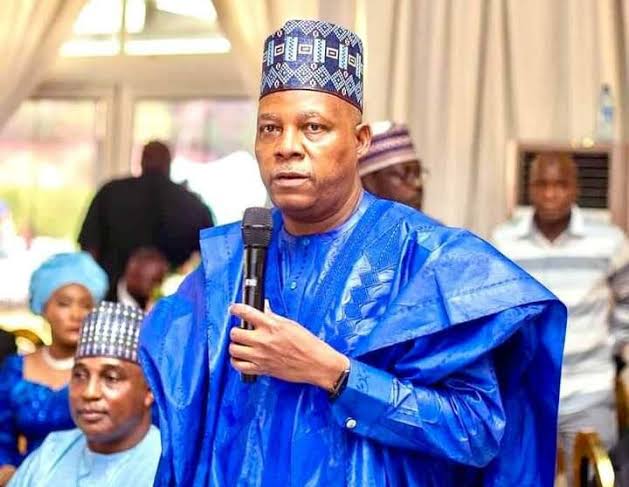 The camp of the candidate of the All Progressives Congress (APC), Asiwaju Bola Ahmed Tinubu has reportedly narrowed down on two persons for consideration as running mate.

Reports allege that an Anonymous NWC member revealed that the northern stakeholders believe Shettima, a former Borno governor, is a better option than the former Speaker of the House of Representatives, Yakubu Dogara, and the Kaduna state governor, Nasir El-Rufai, who were also reportedly being considered.

Barring any last minute-changes, the source claimed that Shettima would be unveiled as the running mates
of the ruling APC contender for the 2023 presidency.

The Independent National Electoral Commission (INEC) has fixed June 17, as the deadline for the submission of candidates for the presidential positions.

Multiple sources told revealed that the former Lagos State governor has pencilled down the name of Shettima, who played a critical role in his campaign as his running mate.

“Asiwaju is comfortable with Senator Shettima, not only because of his contribution towards his emergence but he feels the former Borno governor is acceptable to all in the country because he has built bridges across all the divides in the country when he was governor and also when he went to the National Assembly as a senator,” he said.

Another source in the presidency said Shettima enjoys the full support of all the three APC governors in the North East geopolitical zone even as he has been supporting programmes and policies of President Muhammadu Buhari by attributing the success he recorded in Borno to the support of the president.

“Buhari is not averse to the candidature of Shettima,” he said.

“The former Borno governor has been one of the frontline supporters of the president. He brought serious votes in 2015 and 2019 for the success of the president not only in Borno but in other North-East states. Also, the three governors in the North East (Babagana Zulum of Borno, Mai Mala Buni of Yobe and Muhammed Inuwa Yahaya of Gombe) are all sympathetic to Shettima’s candidature.

“Specifically, Zulum has said he is not interested in becoming the running mate. When Tinubu visited Maiduguri last month, Zulum pleaded that Shettima be considered as the running mate,” he said.

According to him, if considered, Shettima will make the “Tinubu presidential ticket inclusive, demographically sensitive and politically correct.

“Shettima ensured the reign of religious harmony in Borno State and spent more than a billion naira to rebuild churches destroyed by the Boko Haram terrorists and singlehandedly sponsored more Christian pilgrims to Jerusalem than Christian Benue, Plateau and Taraba,” he said.

It was however gathered that three governors who are from the North West geopolitical zone, Abdullahi Umar Ganduje (Kano), Atiku Bagudu (Kebbi) and Mohammad Badaru Abubakar (Jigawa) are also eyeing the seat.

“But the fact is that the APC is looking at the direction of the North East to produce the running mate so as to deplete the chances of PDP candidate Atiku,” he said.

Besides, Moneycentral also gathered from reliable sources that elements of the Congress for Progressive Change (CPC) are planning to approach President Buhari to recommend Abubakar Malami, the Attorney-General of the Federation and Minister of Justice or the Aviation Minister, Hadi Sirika, for the position of the vice president.

“The CPC elements are planning to approach President Buhari to seek for his intercession to endorse either Abubakar Malami or Hadi Sirika as the running mate,” the source said.

“But there is the high probability that the president will repeat what he did ahead of the APC special convention; he will listen to all but he will most likely allow the candidate to have a say in who he wants to work with…They would collectively work in producing the right candidate who will bring votes and acceptability because the ultimate goal is for the APC to retain power,” he said.

It was learnt that Tinubu has an appointment with the president tomorrow and that the issue of running mate is among the issues to be discussed.