PDP alleges attack, killing, intimidation of its members in Ebonyi 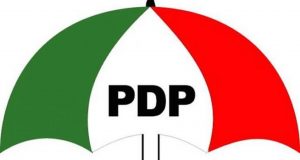 The Peoples Democratic Party, PDP, yesterday, raised the alarm over alleged attack, killings and intimidation of its members in Ebonyi state.

The main opposition party also said some of its members and leaders in the state were being harassed and accused of phoney criminal acts by the All Progressives Congress, APC-led government in the state.

Addressing newsmen at the party’s secretariat, Abuja, national publicity secretary of the party, Kola Ologbondiyan said Governor Dave Umahi has been firm in his consistent intimidation of PDP leaders in Ebonyi for simply refusing to defect with him to the APC.

“On the 30th of November 2020, one of our members, Mr. Shedrack Nwode, a native of Umuezoka, along with his fiancée were shot dead by thugs suspected to be working for the APC, for refusing to chant ‘APC, Change’ at a traditional wedding ceremony.

“Similarly, on Friday, 4th of December 2020, three prominent supporters of PDP from Ugwulangwu in Governor Umahi’s own Local Government Area, were arrested on trump-up charges of being cultists.

“During a recent courtesy call on the governor of Ebonyi State, Engr. Dave Umahi in Abakaliki by the Police Assistant Inspector General (AIG) Zone 9, Mr. Okon, the governor openly and without any investigation, criminally accused prominent leaders of our party, including, Sen. Anyim Pius Anyim, Senator Sam Egwu, Chief Ali Odefa, Hon. Linus Okorie among others as sponsors of banditry and violence in the state.

“It is already common knowledge that agents of the Governor Umahi-led administration had gathered known cultists and thugs and armed them with dangerous weapons including pump action riffles to be unleashed on innocent citizens, particularly members of the opposition.

“These agents of APC government in Ebonyi State have also resorted to using the thugs to disrupt the meetings of our party as well as foist a reign of terror in the state, wherein thugs have taken over the streets and openly extort money from helpless motorists.

“Only recently, a member of our party, Barr. Amos Ogbonnaya, who refused to join Governor Umahi to the APC was abducted and later released with life threatening injuries after much public outcry. He is still in the intensive care unit of a hospital.

“Though Ogbonnaya recognized his abductors as state government agents and reported to the Police and the Department of State Services, DSS, no arrests have been made to bring the perpetrators to book,” Ologbondiyan said.

According to the publicity scribe, Chief Henry C. Udeh (Ajim Best), from Okposi in Ohaozara Local Government Area “was brutally attacked for daring to hold PDP meeting in his own house and many valuables, including vehicles were destroyed.”

He also said the party was in receipt of a report that a PDP member, Prince Anyigor Methuselah of Ezza North “has been abducted and is reportedly being kept at the Cabinet Office of the old Government House in Ebonyi State.”

He continued: “Our party further alerts Nigerians of Governor Umahi’s resort to labelling opposition voices in the state as cultists and terrorist elements as a ploy to victimize members of our party as well as incite federal security agencies against our leaders.

“Governor Umahi’s suppressive government is now sealing off homes and businesses of PDP members all in a bid to cow and silence them.

“A hotel belonging to former governor Sam Egwu has been sealed up while a private school belonging to another member of the PDP, Barr. Friday Agbom was also sealed on trumped up charges.

“As a party, we are worried over the vexatious disposition of Governor Umahi towards the opposition, dissenting voices and other innocent citizens in the state; a development that has heightened security concerns and capable of triggering a huge crisis that can destabilize the state.

“The action of the APC-led government has also foisted a reign of terror in the state, crippled economic activities and brought untold hardship to the people.

“Since Governor Umahi realized that he is alone in his political voyage in the APC, he has been in distress, having been left in the cold and as such, seeks to decimate the opposition and disrupt peaceful coexistence in the state.

“Our party counsels Governor Umahi to have only himself to blame for his self-inflicted political woes, instead of seeking to drag down and destroy the entire state because of his botched political ambition.

“The PDP also cautions Governor Umahi to note that the people of Ebonyi State can never be intimidated or cowed by the APC and its external backers, who are looking for every means to cause mayhem and ruin the state for their political gains.

“Our party calls on all our members in Ebonyi to remain calm even as we caution Governor Umahi to note that human history has always shown that there is a limit to which a people can bear in the face of open aggression and intimidation.

“It is therefore imperative for the Inspector General of Police as well as the military high command to note the antics of the Umahi-led administration in the state and take urgent steps to protect the innocent citizens so as to save the state from imminent collapse.”

He challenged the governor to test his popularity on the ballot after his second term in office on the platform of the APC to prove to Nigerians his electoral mileage.

Political affiliation, he noted, is a matter of choice, stressing that the people of Ebonyi State do not deserve to be punished for electing to remain in the PDP when the governor left for the ruling party.“

But reacting to the allegation, the state Chairman of the All Progressives Congress, APC, in Ebonyi State, Chief Stanley Okoro Emegha described the allegation by the PDP as false.

The APC chieftain who doubles as the Commissioner for Internal Security and Border Peace requested that the PDP should give details of their allegation instead of looking for cheap blackmail against the administration of Governor David Umahi of Ebonyi State.

He said: “If there any clear details of where somebody was killed, then we can respond to it. It is not only APC people that my office is to protect; the state government is protecting every citizen of Nigeria in Ebonyi State.

“The government is to protect all the citizens of the state and so, if we have details of such killing, then we can now follow it up. When you don’t have details, how do you brief? Where did they kill the person, you can’t say?

“Tell them that the chairman of APC who doubles as the Commissioner for Internal Security said that the information is false. They should give details of how the persons and where the persons were killed.

“Is it not when they want to talk, so that the PDP at the national will know that they are existing that they will start making up such falsehood.”

His younger brother, Anyigor Ifesinachi Daniel, who spoke to Journalists in Abakaliki on Wednesday evening, said he was last seen last Saturday, after he left home for a burial in Afikpo North LGA of the state.

The victim’s younger brother said he dialed his mobile number on Saturday after he waited for his return to no avail, but an unknown person picked the call and warned him never to call the line again.

“My brother, Anyigor Methuselah Maduabuchi last Saturday told me he was going to a burial at Afikpo North LGA and we scheduled to go somewhere by 12 o’clock when he returns from the burial and by the time I called him to know if we would still go to the place, his phone was ringing but he was not picking. I kept on calling to no avail.

“In the evening of that day, I called again and somebody picked the call and I asked the person to give the phone to the owner but he shunned me and threatened me not to call the number again. I hung the call.

“I have dialed his number several times since then and it has not been going through. Apart from that, I have not got any other useful information about his abduction.

“He used to post a lot about bad governance on Facebook and had been getting attacks and threats from people believed to be supporters of government. That’s why I decided to report to the media to help me. I have also reported the matter to the police and the Department of State Services.

However, the state Commissioner for Internal Security, Mr Stanley Okoro Emegha denied knowledge of the alleged abduction, warning that people should stop dragging government into every issue.