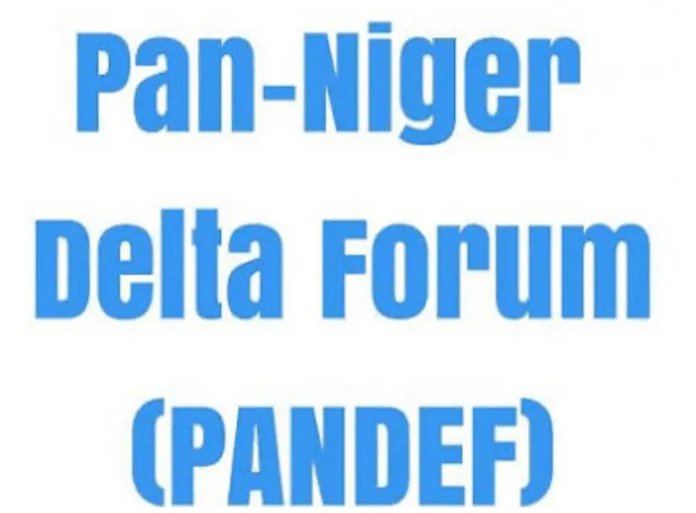 Ahead of the 2023 general elections, the Pan Niger Delta Forum (PANDEF) has advised politicians from the Northern part of the country seeking to contest for Nigeria’s presidency to wait till 2031, for the sake of national harmony and peace.

The forum in a statement issued yesterday by its National Publicity Secretary, Mr. Ken Robinson, while agreeing that everyone has the right to take part in the governance of the country, stressed that it was equally fundamental to uphold the indispensable principles of fairness, equity, and justice for overall peace and progress.

It was also of the view that the federal character principle, now allegedly being brazenly infringed upon by the Buhari’s administration, was introduced to address the challenge of disproportionate and ethnicity-based domination of the country, by ensuring that the composition of every government, all over the federation, reflects all its different parts.

PANDEF described those saying that zoning was unconstitutional as barefaced mischief-makers, insisting that the north would have completed the statutory eight years by 2023.

Therefore, it stressed that it would only be reasonable that power should rotate to the south, as has been the case for 22 years of the third republic.

The group averred that it should therefore be unthinkable that the north should contemplate clutching onto the presidential seat, in 2023, at the end of President Muhammadu Buhari’s two tenures of eight years.

The statement reads: “We consider declarations, by some individuals and groups, now, suddenly opposing the extant practice of rotational zoning of political offices, particularly that of the Presidency, as unpatriotic and self-serving.

“Given the multi-faceted heterogeneity of our country, Nigerians should be critically concerned, not only about the credibility and competence of those aspiring to occupy the highest office, but also, where they come.

“We must conscientiously ensure that zoning, especially for the office of president and governors is very well maintained. Besides, PANDEF firmly affirms that no zone of the country is in want of men and women of noble character, acumen, competence, and integrity, to lead Nigeria at this crucial time.

“To say, suddenly, only in 2021, that the presidency should be open to all zones in 2023, amounts to moving the goalpost, in the 87th of a 90-minute game, implying that somebody from Daura, Katsina State, can, again, become President of Nigeria in 2023, within the present mood of the country.

“PANDEF says a ‘big no’ to such an attempt to worsen the current bare threads of national cohesion, unity and all-around prosperity. Section 134 (2) of the 1999 Constitution (as amended) provides that: A candidate for an election to the office of president shall be deemed to have been duly elected where, there being more than two candidates for the election; (a) he has the highest number of votes cast at the election; and (b) he has not less than one-quarter of the votes cast at the election in each of at least two-thirds of all the states in the federation and the Federal Capital Territory, Abuja.

“The framers of the constitution incorporated the cited and related provisions to check sectional preponderancy, and guarantee balanced spread, above all, a secure sense of inclusiveness, in the political governance of the country.

“The need for equitable sharing of political power in Nigeria, cannot be overstated. The basis for success in any viable democracy, especially in a diverse and complex country like Nigeria, is fair and even sharing of critical offices northerners who hunger to become president should wait till 2031.”