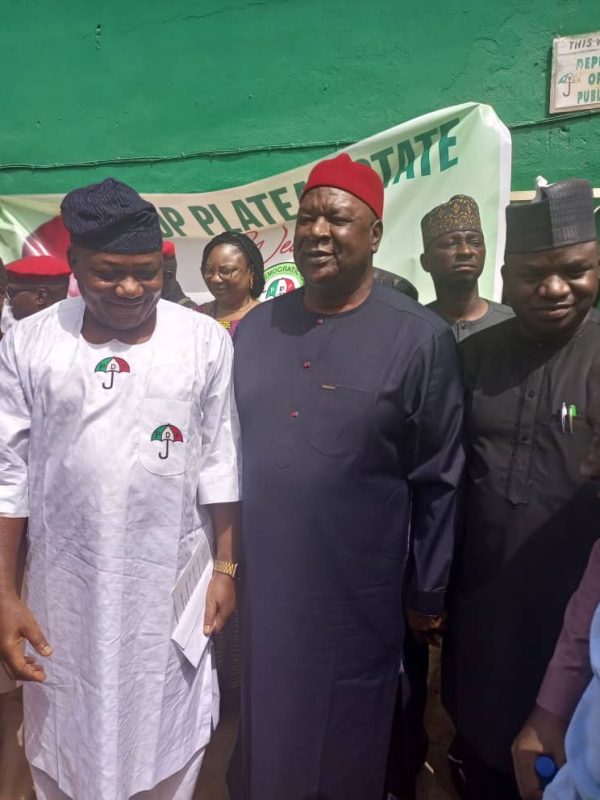 Former Senate President, Sen Anyim Pius Anyim, has appealed to the leadership of the People’s Democratic Party PDP to zone the Presidency to the south east Nigeria.

Senator Anyim made the appeal in Jos, Plateau state, on Monday, at the People’s Democratic Party (PDP) state Secretariat, during his visit to the party executives.

“The only formula for us the PDP to win the 2023 Presidency is to zone to the south east geopolitical zone.”

“If we must win the next election, zoning must be respected, the South East and North Central have suffered neglect, let the South East take its turn this 2023.”

Sen Anyim appealed to the People’s Democratic Party to respect zoning for the Presidency, according to him, it will ensure equity, fairness and justice.

“If we want to win this election we should respect zoning. Fairness and equity is the only way to bring Nigeria together.”

Senate President Anyim said his administration will create an economic policy that will develop tge economy.

“This will address issues of economy especially food insecurity.”

He said persistent crisis has prevented cultivation of agricultural produce. “farmers from the north east Nigeria no longer goes to farm due to banditry.”

“If we resolve issues of insecurities, farmers will go back to the farm.”

According to him the administration of Muhammadu Buhari could not tackle food insecurity because it has no economic team.

Sen Anyim said he has the capacity to rule Nigeria as President, because of his credibility during his tenure as President of the Senate.

Anyim asured that there must be peace on the Plateau, because Jos was the place for holidays due to its weather.

In his address, Plateau state chairman of the People’s Democratic Party PDP Chris Hassan, called on Sen Pius Anyim to remember Plateau people in his administration.

Hon Hassan assured Senator Anyim that Plateau delegates are reliable, and will not disappoint him.

PDP stakeholders who spoke at the meeting were of the opinion that should he (Anyim) wins, he should address critical issues confrontating the entire country.