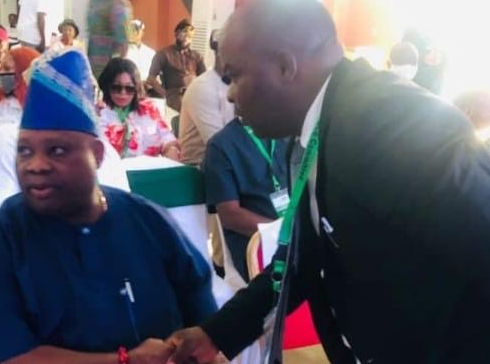 In a statement made available to the press after a tour of the state to observe the conduct of the election process, with different teams of observers and delegation of monitors, the University Don, Peace and Good governance advocate said that the victory of Senator Ademola Adeleke is a testament to the level of political consciousness of the populace and the desire for good leadership in the Country.

According to him, the People of Nigeria are seriously yearning for meritocracy: better hands, critical minds and thinking heads who can salvage the country from various economic, political, and security challenges bedeviling them and not just mediocrity and god-fatherism.

In his words” The declaration of victory for the Candidate of the Opposition party, Senator Ademola Adeleke having fulfilled the electoral requirements and won in 17 local Government areas out of 30, and with the highest number of votes, without any violence anywhere in the state is indeed very commendable. Before the election, we met with the Candidates of the political parties and made our stand known on peaceful conduct in all the processes. They signed a peace Accord and they all adhere strictly to it. This is quite impressive.

We also embarked on an awareness campaign, sensitization and sponsored enlightenment programmes for the people on the need to choose and choose right because the leadership of any nation determines the destinies of the citizens and the denizens.

We are glad that there was a reduced level of electoral malpractice and the election could be a template for other elections in Nigeria. We are glad at the outcome because It reflects the actual wishes, wants and desires of the people and residents of Osun State. The victory is not for the declared Winner but for the people of Osun State and the hope for Nigeria’s Democracy.

It shows that people are awake and really want a change in the direction of their destiny. The victory of Adeleke is a bold and emphatic testimony to the good work he has been doing in Osun and his symbolic commitment to democracy in Nigeria.”

Prof Babalola lauded the Independent National Electoral Commission INEC for justifying the confidence reposed in it as an unbiased umpire with its officials acting in the best professional way.

“Importantly, the Independent National Electoral Commission (INEC) Chaired by Prof. Mahmood Yakubu must be applauded for upholding the People’s will despite reported pressure to unduly influence the outcome of the poll. We will collaborate more with INEC and other stakeholders to improve voter education before the 2023 general elections so as to have the best candidate to sail the saddle of the country.”

The WPO DG, Babalola also gave kudos to the security agencies for ensuring the safety of lives and property as well as being able to prevent violence which made election freer, fairer and more credible than other previous elections in the state and the region.

The World Peace Organization also commended the Incumbent Governor Gboyega Oyetola describing him as a good democrat who adhere strictly to the protocols and provisions of the Peace Accord during the election despite having the Machineries to play the game otherwise.

Prof Babalola charged other Nigerian Politicians to learn the good examples already shown by Governor Oyetola. He also called on the Governor-Elect to be magnanimous in victory and take seriously with utmost priority his electoral promises for the people.