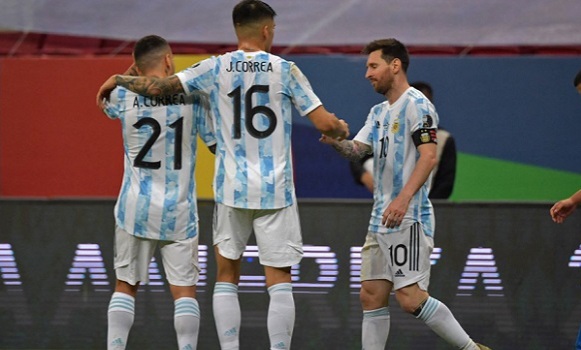 Lionel Messi’s hopes of winning what is likely to be the final FIFA World Cup of his career suffered a significant blow in Argentina’s opening Group C fixture on Tuesday as the South Americans were stunned by Saudi Arabia in one of the biggest upsets in the tournament’s long history.

The early signs had suggested that the game would follow the anticipated script of a comprehensive Argentina win when Messi opened his account in Qatar by slotting home a 10th minute penalty – and the floodgates looked certain to open as the Copa America champions had a remarkable three goals disallowed in the opening 45 minutes.

The momentum quickly turned in the second half with two goals in the space of five minutes from Saleh Al-Shehri and Salem Al Dawsari, which put Saudi Arabia into an unlikely lead.

Despite Argentina pouring forward during more than 13 minutes of injury time, the Green Falcons hung on to claim one of the most remarkable victories ever seen on football’s biggest stage.

Saudi 🇸🇦 fans chanting: "Messi, where is he? We broke his eye (we humbled him)."#MGLQatar2022pic.twitter.com/LNq1irTaMi

Saudi Arabia’s relentlessly energetic performance was made even more remarkable given that the win ended the second-longest unbeaten streak ever seen in international football. Argentina had not tasted defeat since July 2019 – a span of 36 matches which included last year’s Copa America.

But for all of their endeavor up front, the Saudi performance was just as notable for the ruggedness displayed in restricting Argentina’s star-studded attack.

Lionel Messi came close to an equalizer late on but his header was repelled by the outstanding Mohammed Al-Owais, who was a constant thorn in Argentina’s side throughout.

However, even a player of Messi’s undoubted talents appeared powerless to overcome a heroic Saudi defensive performance as the clock ticked towards 90 minutes.

Despite the addition of 13 minutes of injury time, an increasingly listless Argentina could not penetrate the impressive Saudi backline in what was a disastrous result for Lionel Scaloni’s men, and likely the biggest upset seen in a World Cup since Argentina’s 1-0 defeat to Cameroon in 1990 or Northern Ireland’s unlikely win against Spain in 1982.

After arriving in Qatar among the favorites to lift the trophy, Argentina now face a battle just to emerge from their group – and will now focus their attention on what has become a must-win game against Mexico on Saturday.

Saudi Arabia, meanwhile, can secure qualification from Group C with a win against Poland on the same day.