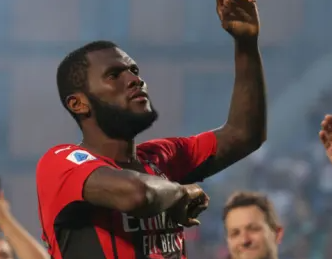 He joins the Catalan side as a free agent and signed deal until 2026 with a €500 million release clause. According to Goal, Kessie is set to earn €6.5 million and could potentially earn more off incentives.

His signing has been all but confirmed for a while now with the only thing left was for the club to issue an official statement.

It will be interesting to see where he is deployed by manager Xavi Hernandez. He is not considered to be the replacement or the back-up to Sergio Busquets.

The 25-year-old is at his best going forward and he demonstrated that during his time with AC Milan where he played an important part in helping the Italian side win Serie A for the first time in 11 years.

In his five seasons with the Rossoneri, he scored 36 goals and contributed eight assists. His performances made him one of the top midfielders in Europe and was heavily sought after once it became apparent he was not going to renew.

Barcelona managed to swoop in and convince him to sign for them.

At the very least, he is going to provide quality depth, something Barcelona has been missing. The starting line-up wrote itself with limited options on the bench. With Kessie’s arrival, it not only adds depth but leadership experience.

The likes of Pedri, Gavi and Nico Gonzalez are all young with Nico being the oldest at 20. Kessie has experience in winning a league title and playing in the Champions League.

The latter is of significant importance given Barcelona’s disastrous results the last couple of seasons. He’s a player who won’t be intimidated and could end up playing a significant role should they move on from Frenkie de Jong.

He is Barcelona’s first signing ahead of next season but won’t be the last. The next domino to fall will be the signing of former Chelsea center-back Andreas Christensen.