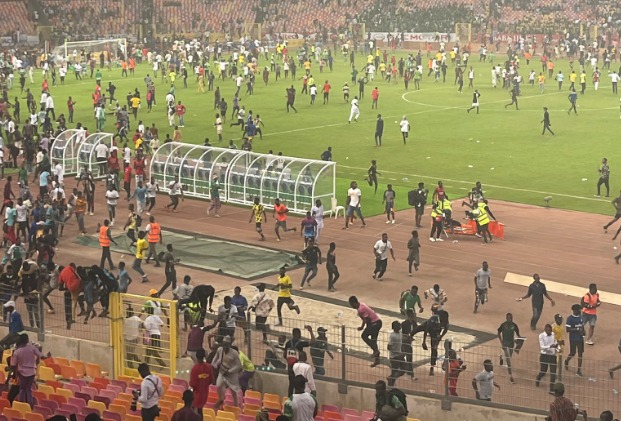 The Federation of International Football Association (FIFA), has sanctioned Nigeria Football Federation (NFF) over the stampede that occurred at the Moshood Abiola Stadium in Abuja after the country failed to qualify for the Qatar 2022 World Cup.

According to the latest FIFA Disciplinary Report published on its website on Monday morning, Nigeria was found guilty of not “implementing existing safety rules and failure to ensure that law and order are maintained in the stadium, invasion of the field of play and throwing of objects.”

The world football governing body also handed Nigeria a fine of CHF 150,000 and a one-match behind closed doors.

In late March, Moneycentral reported how some angry fans invaded that pitch and vandalised some of the stadium’s facilities after the Super Eagles lost the 2022 World Cup ticket to Ghana.

Joseph Kabungo, the Zambian who was the Confederation of African Football (CAF) doping control officer for the match, was said to have lost his life during the chaos.

The NFF would later clarify that the CAF official died from cardiac arrest which it said had nothing to do with the violence that ensued after the match.

Sunday Dare, minister of sports and youth development, also announced the constitution of two separate committees toinvestigate the incident — with the panels’ findings yet to be made public.