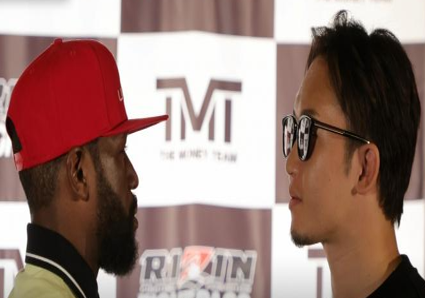 Floyd Mayweather’s exhibition match with Mikuru Asakura was nothing short of entertaining, despite it only lasting two rounds.

‘Money’ put on an impressive defensive performance, waiting for his opening to land a crushing blow to Asakura at the at the Saitama Super Arena in Saitama, Japan. Although the result was unofficial, Asakura met Mayweather and landed plenty of his own punches, forcing the champ to give a wry smile.

In an amusing opening round, Asakura was on the offensive and displayed showmanship when Mayweather landed a body blow, with Asakura lifting his arms in applause.

Leading into the second round of 12, Mayweather began aggressively, offering an open stance, inviting Asakura to land blows. The American’s strength has always been his defense, known as one of the greatest defensive boxers, and he was able to return the blows that Asakura gave in the opening three minutes.

This was reflected by Mayweather’s 33% initiated attacks to the 30-year-old compared to the 67%, however were nowhere near as effective as the experienced boxer.

Looking like going into round three, Mayweather starting hitting the body and jaw of Asakura, with viewers seeing the Japanese boxer’s legs start to shake and lose balance. The 45-year-old pounced on his opportunity, striking Asakura just before the ball rang.

The referee gave Asakura a chance to get up but unfortunately couldn’t get to the next round, with the ruling a knockout in favour of Mayweather.

The American post-bout said he loved his time in Japan and would be open to returning for another exhibition match.

A right hand from Floyd just before the bell brings an end to the bout, and Asakura suffers his first KO loss ‼️