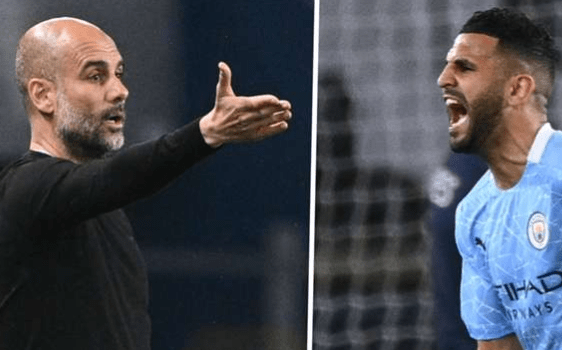 When Manchester City have been knocked out of the Champions League over the past four seasons, the blame has been laid squarely at Pep Guardiola’s door.

Successive quarter-final exits against Liverpool, Tottenham and Lyon have led to accusations that the Catalan ‘over-thinks’ the biggest games of City’s seasons, and there is definitely evidence to support that theory.

And yet, faced with the biggest game of his five-year City tenure against Paris Saint-Germain on Wednesday, Guardiola kept things simple.

There were no gimmicks and no shocks when the City line-up was announced. Guardiola went with his strongest team in a system that has led them to the cusp of a treble-winning campaign.

With a 2-1 first-leg victory in their back pocket as City return from the French capital, it is fair to say it worked.

For large parts of the first half at Parc des Princes, City seemed more concerned with the ethos that attack was the best form of defence, and forgot that attack was also best way to score and win the tie.

But when they got it right after the break, they controlled the game just as Guardiola had wanted them too.

Whatever he said had half-time transformed the emphasis of a Champions League semi-final that appeared to be slipping away from the Premier League side, and should now give his side the confidence that they can complete the job.

For 45 minutes, City had played with fear and a lack of belief that meant they were lucky to trail the French champions by just a single goal, scored by Marquinhos.

But by full-time, PSG had imploded and will feel fortunate to still have a foothold in the tie heading into the second leg the Etihad Stadium in six days’ time after playing the final 13 minutes with 10 men following Idrissa Gueye’s red card.

City pinned the home side back inside their own half, which in turn panicked a settled defence and forced them into aimless balls that ensured Neymar and Kylian Mbappe were kept well away from Ederson’s goal.

It was exactly how Guardiola had planned it, and he just needed to give the players the belief that they could do it.

“Sometimes you need time to be relaxed and to be ourselves,” Guardiola explained post-match.”The first half is normal – over 180 minutes you don’t want to lose the ball and you don’t play free.

“We changed a little bit the way we pressed and the second half we were more aggressive.”

That aggression eventually led to City’s goals, and though they were both came about via a touch of fortune, with Kevin De Bruyne’s floated cross evading everyone to nestle in the corner and Riyad Mahrez’s free-kick flying through a gap in the PSG wall, they were nonetheless well deserved.

City will do well to recall that PSG lost at home to both Bayern Munich and Manchester United earlier in the competition, yet beat both – as well as Barcelona – on the road.

The tie, therefore, is far from over, despite no English side having ever been knocked on the 47 previous occasions they have won the first leg away from home in a European Cup knockout tie.

The skills of Neymar and Angel Di Maria along with the blistering pace of Mbappe threatened to blow City away here, and a performance similar to the first half again next week would suddenly see them come under pressure once more.