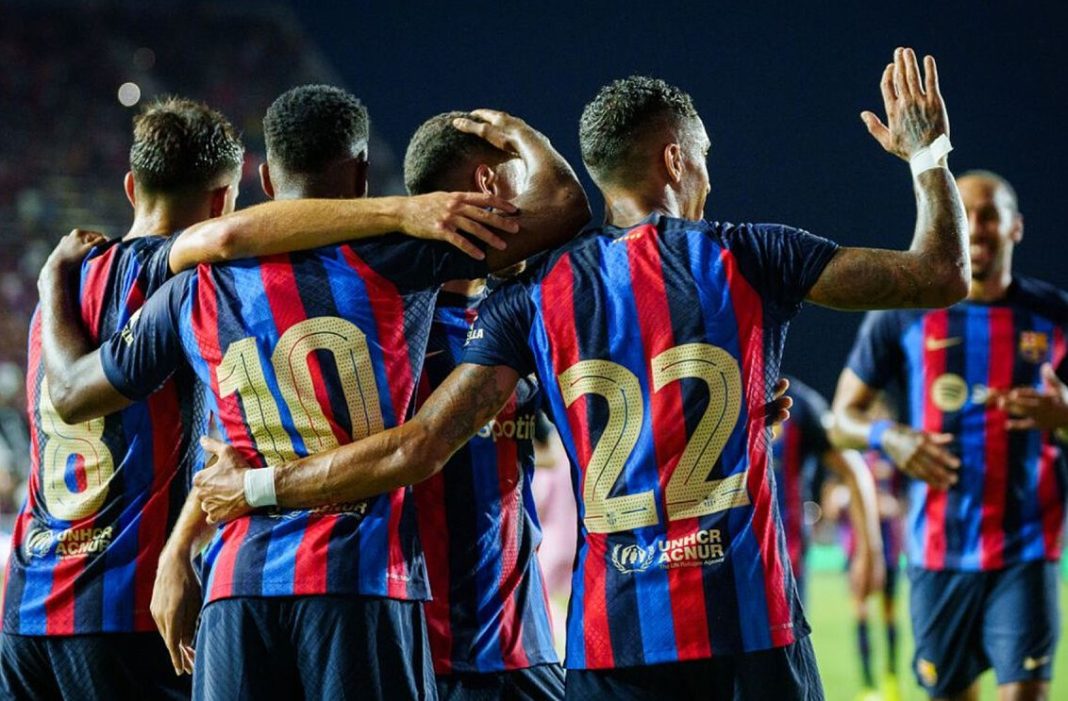 Barcelona started their preseason tour of the United States with a 6-0 victory over Major League Soccer side Inter Miami at the DRV PNK Stadium on Tuesday night.

Twenty-four players took the pitch for Barcelona and all contributed to a dominant performance that saw Barcelona score six goals, with Lewandowski yet to join the team.

The game saw some brilliant displays of attacking football by a fast, creative Barçelona side that dominated Inter Miami.

Barcelona’s new signings Andreas Christensen and Raphinha made their debuts in the opening period, and it was the Brazilian who shined with his full repertoire of skills and intelligence, making excellent passes and taking on his defenders without fear.

Former Leeds star Raphinha was involved in 3 goals for Barcelona and his assist to Pierre-Emerick Aubameyang after a one-two with Pedri got things started.

Two goals, one assist and a fantastic debut for Raphinha, and at halftime Barçelona had the win in the bag thanks to a dominant performance.

The final period brought a whole new XI, including Frenkie De Jong as a centre-back, and many more goals: Gavi, Memphis Depay (with a spectacular solo goal) and Ousmane Dembélé made it 6-0 with 20 minutes to go, and despite playing at a slower pace than the first half side did the Blaugrana were still easily finding spaces inside the Inter Miami defence despite a change to a back five by the home team.

The final 20 minutes weren’t nearly as fun as Inter did everything they could to not allow more goals while Barça seemed to have had enough and just ran the clock out. The final whistle came, and the first preseason game in America went according to plan with a great win and quite a few excellent individual performances.

Barcelona will play their next friendly against Real Madrid in Las Vegas is next, and new signing Robert Lewandowski is expected to make his debut.