With the final international break of the 2021/22 season now in the books, the final stretch of this thrilling LaLiga Santander campaign has arrived and there is a huge matchup this Sunday night as FC Barcelona host Sevilla FC at the Camp Nou. There are several other intriguing fixtures too, including a difficult trip to Vigo for league leaders, Real Madrid.

The first of the Matchday 30 fixtures takes place at 2pm CEST on Saturday, as Getafe CF take on RCD Mallorca. This will be the first match for the islanders’ new coach Javier Aguirre, with the veteran Mexican tactician taking charge of his sixth LaLiga Santander club. He’ll hope to steer his new team out of the relegation zone as quickly as possible.

A regional rivalry follows next, with Levante UD vs Villarreal CF at the Ciutat de València. The home side remain bottom of the table and in need of a three-point haul, while the visitors are just as determined to take the win as Unai Emery’s Champions League quarter-finalists need every point they can muster if they are to qualify for European football next season.

At 6.30pm CEST on Saturday, LaLiga leaders Real Madrid are back in action and they’ll be motivated to bounce back from their 4-0 ElClasico defeat just before the international break. It won’t be easy, though, as they are away at RC Celta, who haven’t lost any of their past six home games, winning four and drawing two of them.

Atlético Madrid return to action in the Saturday night game, hosting Deportivo Alavés. Diego Simeone’s men come into this one full of confidence as they, and especially João Félix, were in good form just before the pause for international football, winning five in a row in LaLiga Santander to move into fourth place. 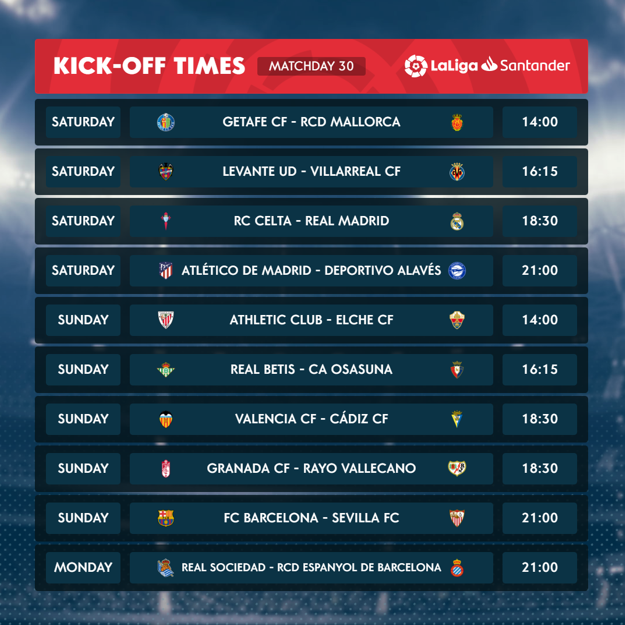 There are five fixtures on Sunday, starting with Athletic Club vs Elche CF as the team from Bilbao aim to keep alive their European hopes. Real Betis will approach their Sunday afternoon game at home to CA Osasuna with a similar mindset, keen to bounce back from what was a disappointing run of form across February and March. Los Verdiblancos have won just one of their past eight across all competitions, so will look to start April on the front foot.

There are then two 18:30 CEST games on Sunday evening, with Granada CF vs Rayo Vallecano and with Valencia CF vs Cádiz CF. Both the Andalusian sides have improved under their new coaches, with Rubén Torrecilla at Granada CF and Sergio González at Cádiz CF building solid foundations. That has left both those teams outside the relegation zone, but they’ll look to build a cushion to the bottom three and to do so quickly.

Then, at 21:00 CEST on Sunday, it’s third-placed FC Barcelona vs second-placed Sevilla FC. Barça know that they’ll move into second position with a victory and they are in impressive form, having just beaten Real Madrid 4-0 and having also put four past CA Osasuna, Athletic Club, Napoli and Valencia CF in recent weeks. For Sevilla FC, they’ll need to shake off their recent away form if they’re to take a victory, having failed to win on the road since the first week of January. They’ve also not won away at the Camp Nou since 2010, so it will require an excellent performance to secure the three points. Julen Lopetegui’s side have shown this season, though, that they are capable of anything.

On Monday, the final match of the round takes place in the Basque Country with Real Sociedad vs RCD Espanyol. In Alexander Isak and Raúl de Tomás, these two teams have two of the most talented centre-forwards in LaLiga Santander, so this will be a fascinating duel to round off Matchday 30.