It’s a derby weekend in LaLiga Santander, with four of the Matchday 26 fixtures pitting teams from the same region against each other. El Gran Derbi between second-placed Sevilla FC and third-placed Real Betis stands out, but there are several other intriguing contests too in this round of top-flight action.

The first of the regional rivalries is Levante UD vs Elche CF on Friday night, as these two clubs from the Valencian Community meet at the Estadi Ciutat de València. Elche CF haven’t won there since 1993, so will be hoping to earn a rare victory away at Los Granotas side that remain bottom of the table but that are improving.

Saturday’s LaLiga fixtures starts with Valencia CF making the short trip across the Mediterranean Sea to visit RCD Mallorca. José Bordalás’ side haven’t yet won a LaLiga Santander match in 2022 and know it’ll be difficult at the Visit Mallorca Stadium, since RCD Mallorca have won each of their past three matches there.

A tour of Madrid follows, with the final three fixtures of Saturday all taking place in the capital. The first is in the south of the city as Getafe CF host Deportivo Alavés, a match with huge implications for the relegation battle. With Geta having won each of their past four home matches, they’ll be targeting a fifth win in a row to keep the Basque side at a distance. 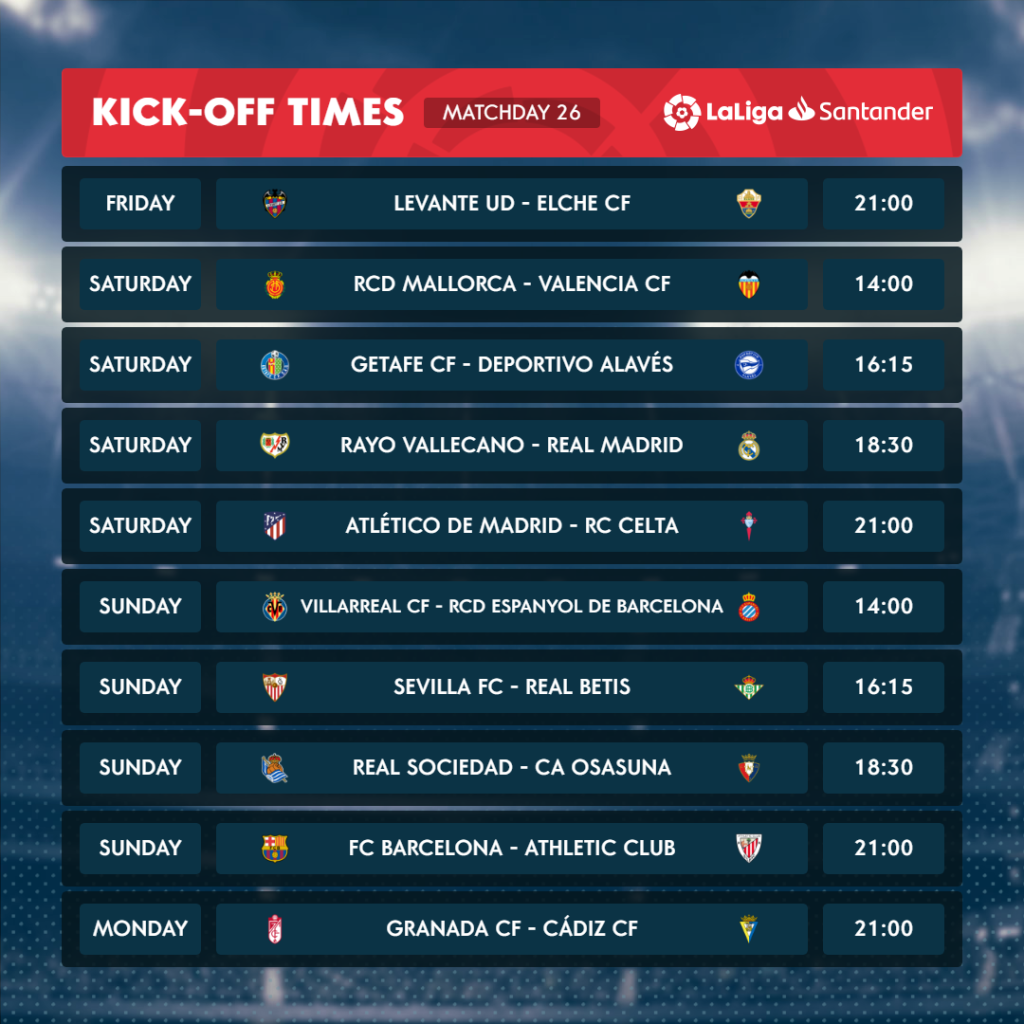 The focus then shifts to Vallecas, where Rayo Vallecano will take on Real Madrid in the next of the weekend’s regional rivalries. It was a tight contest when these two teams met at the Santiago Bernabéu earlier in the season, with Real Madrid edging it 2-1, so it could be even tougher for the league leaders as they visit the side with the third-best home record in LaLiga Santander this season. While it’s true that Rayo’s excellent home form has dropped off of late, they’ll be determined to beat their neighbours and a raucous atmosphere should be expected.

Saturday’s tour of Madrid then culminates with Atletico Madrid vs RC Celta at the Estadio Wanda Metropolitano. Atleti haven’t managed to win two league games in a row since November but will set out to achieve that on Saturday night.

Sunday’s action starts with Villarreal CF vs RCD Espanyol, with Unai Emery’s charges looking to build on their impressive midweek draw against Juventus. The Yellow Submarine are surfacing at just the right time, closing in on the top four and potential qualification for next year’s Champions League.

Then, at 4:15 p.m. CET on Sunday, football fans from around the world will tune in to enjoy the derby between Sevilla FC and Real Betis. This is always a special fixture and produces one of the most famous atmospheres in world football, but there is even more at stake than usual in this derby as it will be the first ever league meeting between these sides in which both of them are inside the top three of the table. Quality football and unparalleled passion should be expected at the Estadio Ramón Sánchez Pizjuán for this third Seville derby of this season, with one victory each so far. 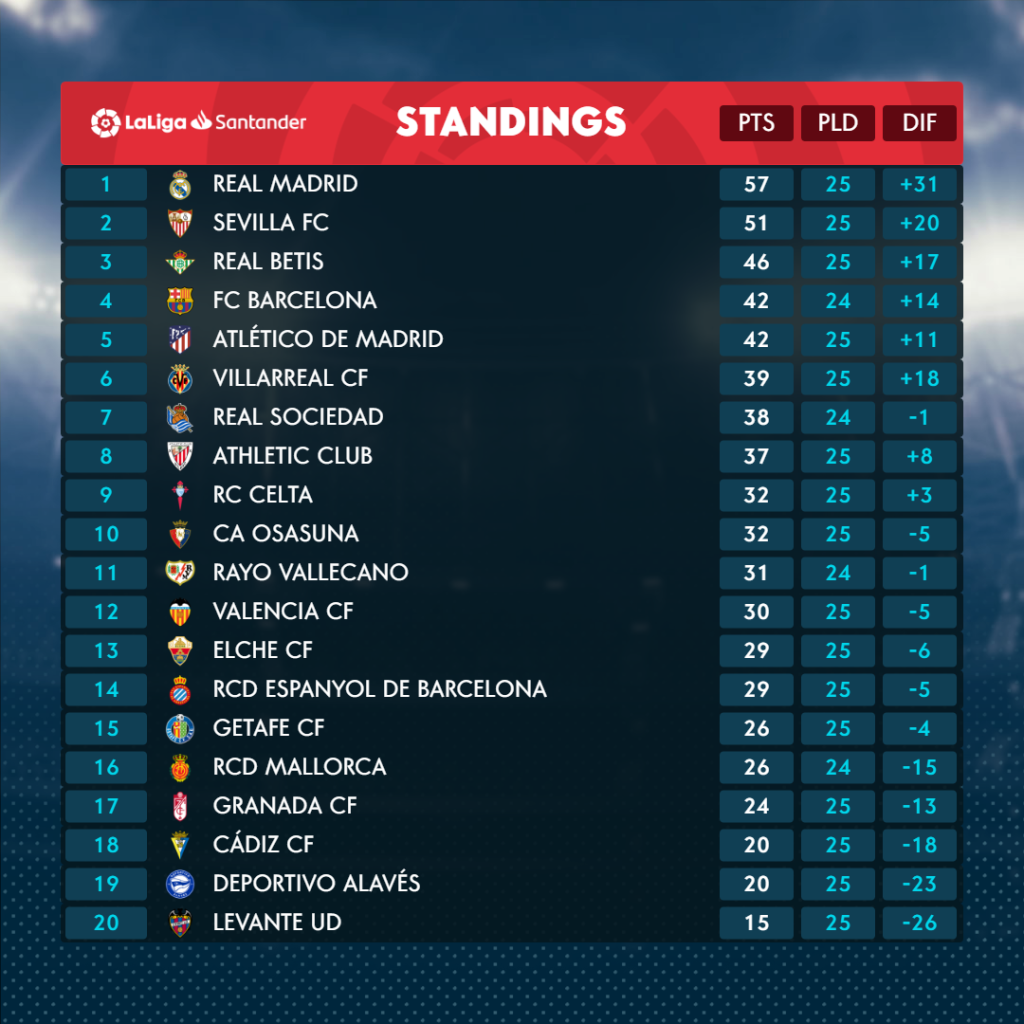 Two big matches in the race towards Europe then take place on Sunday evening, starting with Real Sociedad vs CA Osasuna, as La Real look to get back on track following last weekend’s Basque Derby defeat to Athletic Club. Later, Athletic Club will hope to keep their positive run going when they visit the Camp Nou to take on FC Barcelona. The team from Bilbao have already knocked Xavi’s side out of the Copa del Rey this season and will now seek three LaLiga Santander points, although they’ll travel knowing that they haven’t defeated Barça in Catalonia since 2001.

The final match of this round brings another duel between two teams from the same region, as Andalusian sides Granada CF and Cadiz CF meet on Monday night. This is very much a relegation six-pointer, as Granada CF are currently just outside the relegation zone in 17th, while the Piratas are just inside it in 18th. There will, therefore, be a lot on the line when Cadiz CF make this short trip.