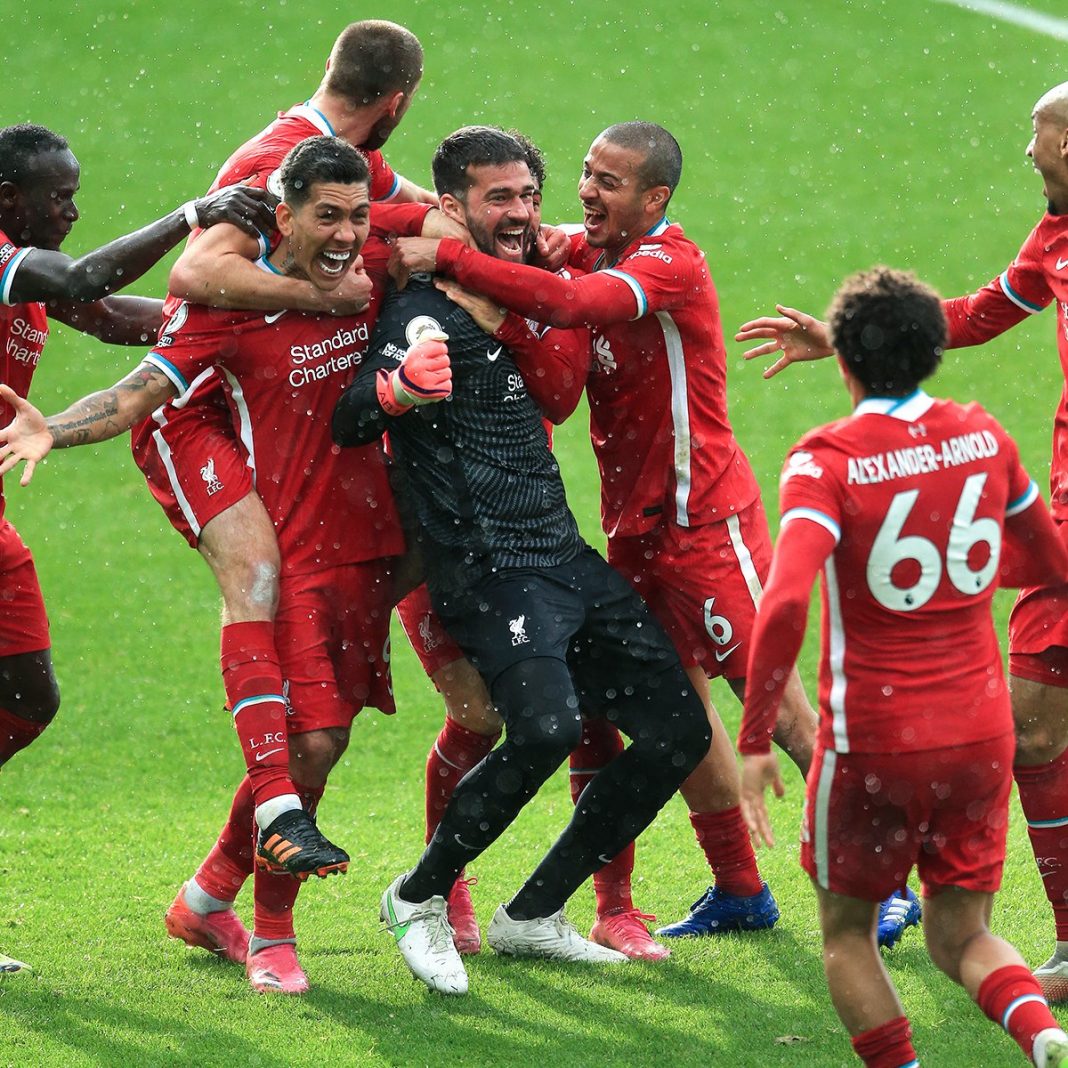 Liverpool had thrown everything at Sam Allardyce’s already-relegated side but by the 95th minute they still had not been able to find a second goal, after Mohamed Salah had cancelled out Hal Robson-Kanu’s opener.

However, the biggest twist was to come, with Alisson sent up for a corner and brilliantly heading home Trent Alexander-Arnold’s set-piece.

The Brazilian, whose father tragically died earlier this year, was visibly emotional at the final whistle as Klopp embraced him amid the Reds’ celebrations.

They know if they can beat Burnley and Crystal Palace, they are likely to be in Europe’s elite club competition again next season.

As for West Brom, who saw Kyle Bartley’s strike rightly ruled out for offside during the second half, they remain second-bottom in the Premier League table.

While it was a must-win for Liverpool in their bid for a top-four finish, the pressure was off for Championship-bound West Brom and, after a series of set-pieces were launched into the Reds’ penalty area, Allardyce’s side struck first with a slick move.

Matheus Pereira picked up the ball midway into Liverpool’s half and flicked a smart pass past Rhys Williams, who had pushed up, for Robson-Kanu to run on to. The striker was making his first start in the top flight in three and a half years but finished in style to record his first Premier League goal since November 2017.

Liverpool responded well, though, and had a series of chances, with Sadio Mane – back in the starting XI in place of the injured Diogo Jota – shooting wide, Williams seeing an effort blocked, and Salah firing straight at Sam Johnstone.

It was that man Salah who came up with something special to pull his side level on 33 minutes. With the ball bouncing around the edge of the West Brom area, Mane prodded it to Salah and he whipped a brilliant low, left-foot shot into the far corner.

There was some controversy in the build-up, with referee Mike Dean awarding Liverpool a free-kick after he got in the way of Fabinho, when a drop-ball seemed the more appropriate restart, but there was plenty more action before Salah’s strike.

The goal moved him level with Harry Kane in the Golden Boot standings – a race which looks set to go down to the wire just like the top-four battle.

Liverpool could have had a second on 35 minutes when Roberto Firmino fired against the bar after a Mane backheel deflected through to him in the box – although West Brom delivered a reminder of their threat on the break when Alexander-Arnold got back well to prevent Robson-Kanu doubling his tally.

The chances continued to flow at both ends of the pitch after the break, with Mane finding the net from an offside position four minutes after the restart before Nat Phillips tracked back brilliantly to take the sting out of Pereira’s effort on the counter-attack.

It was almost a Liverpool breakaway which did the damage moments later when Alexander-Arnold drove his side up the pitch at lightning speed before Salah blasted at Johnstone, while Firmino and Thiago Alcantara were narrowly off target either side of Alisson denying Robson-Kanu from another one-on-one.

After Bartley saw his close-range finish from a corner ruled out because of Matt Phillips standing in front of Alisson in an offside position, it was all Liverpool in the final stages, with Alexander-Arnold blowing a big chance with seven minutes to play, firing over from close range after cutting in on his left foot.

Thiago and substitute Gini Wijnaldum were the next to go close but in the end it was their own goalkeeper who showed them how it should be done.

Sent up in the fifth minute of injury-time, Alisson was unmarked by the West Brom defence and made them pay, arrowing a fantastic header into the far corner and sparking wild celebrations on the Liverpool bench.