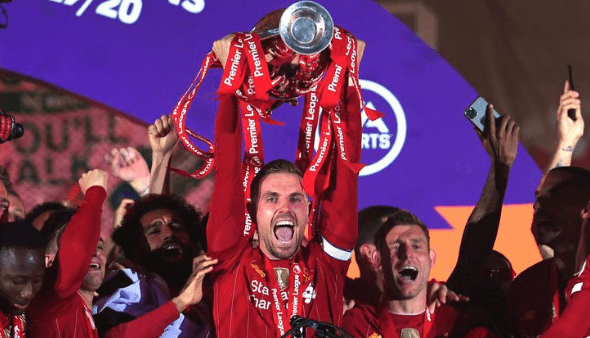 Liverpool lifted the Premier League trophy for the first time amid fireworks in a special ceremony on the Kop at Anfield, following their thrilling 5-3 win over Chelsea.

The champions’ captain Jordan Henderson was handed the silverware by Liverpool legend Sir Kenny Dalglish as the Reds celebrated their first English title in 30 years in style, despite no fans being allowed in the stadium.

Liverpool had clinched the title with seven games to spare on June 25, when Chelsea beat second-placed Manchester City, but had to wait for the conclusion of their final home league game of the season to finally get their hands on the silverware.

The Reds kicked off the party early with a remarkable victory over Frank Lampard’s side to ensure they finish the season unbeaten at Anfield and make it 59 home league games without defeat.

After the match, Dalglish, who was manager the last time Liverpool were champions in 1989/90 and signed Henderson for Liverpool from Sunderland during his second spell in charge in 2011, passed over the trophy to the injured skipper.

With supporters absent due to the coronavirus restrictions, Liverpool had built a stage in their iconic stand for the presentation, while fans gathered and celebrated outside of Anfield.