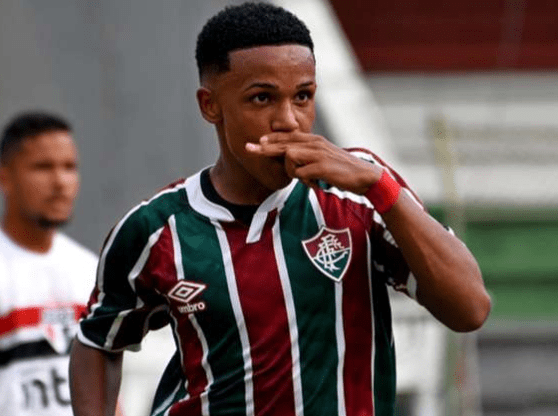 Manchester City have reached an agreement with Brazilian side Fluminense for the transfer of highly-rated forward Kayky, the Premier League leaders said.

The 17-year-old, who has drawn comparisons with Paris St Germain forward Neymar and was on the radar of Premier League champions Liverpool and Shakhtar Donetsk, will remain with the Brazilian Serie A outfit until their end of the current season.

Kayky has scored two goals in eight games for Fluminense in their state championship. The winger also played in the club’s Copa Libertadores clash with River Plate earlier this week.

Man City said in a statement: “We are delighted to confirm we have reached an agreement with Fluminense regarding the future transfer of Kayky.”

Fully named Kayky da Silva Chagas and compared to Neymar, he only made his debut for the senior team this season but has been scouted by City for a number of years.

He has two goals from his nine appearances so far but underlined his huge potential with a stunning solo goal against Nova Iguacu earlier this month.

Kayky was the top scorer in last year’s Brasileirao Under-17 Championship with 12 goals and has also played for Brazil at Under-16 level.

“Kayky is a player who stands out a lot for his technical quality, especially with regard to one-on-ones, and also in his quality in front of goal,” Fluminense’s U17 coach, Guilherme Torres, told Goal.

“He is also very intelligent, searches for empty spaces on the field and has a good ability to provide assists for his team-mates.

“In addition, he has a winning, competitive mentality, which is important for a high-level player. His resilience has grown as he has matured, and he is learning how to deal with adversity.”

Kayky will follow a number of Brazilian youngsters that have moved to City in recent years with former Palmeiras striker Gabriel Jesus being the most successful.

City are also interested in Kayky’s Fluminense team-mate Metinho although they have not yet announced a deal.